Floating point operations — division vs multiplication; how do they affect accuracy?

Which one is more accurate?

Side note: If you could explain why, that would really help me out, I have a feeling it's f(x) as there isn't a denominator but I'm not 100% certain.

ybeltukov showed empirically that $g(x)$ is numerically more precise than $f(x)$, despite the two expressions being formally mathematically equal. Why is this the case?

In your original question, you guessed that

If you could explain why, that would really help me out, I have a feeling it's f(x) as there isn't a denominator but I'm not 100% certain.

...the main culprit for loss of precision is adding (or subtracting) a very large number to a very small number, as opposed to adding two numbers of comparable size. Division and multiplication have near the same effect

In the case of $f(x)$, for large values of $x$ we have $x$ (a large number), times $\sqrt{x+1}-\sqrt{x}$, which tends towards zero as $x\to\infty$. Thus, there is catastrophic loss of precision for large $x$, which is consistent with the first figure that ybeltukov's answer provided.

In contrast, $g(x)$ is the ratio of two large numbers whose sizes aren't that much different (or at least, become more different at a slower rate than in the case of $f(x)$).

This means that the relative sizes of the terms diverge as $x^{3/2}$.

You can compare the precision empirically: 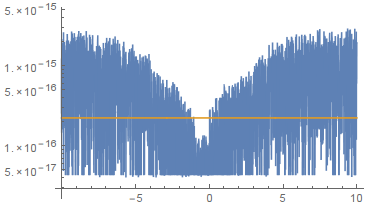 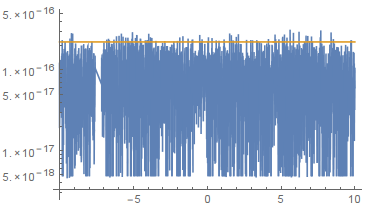 So g has better numerical precision (around $MachineEpsilon). It is because f contains the difference of potentially big numbers.

See also Control the Precision and Accuracy of Numerical Results.

Not the answer you're looking for? Browse other questions tagged accuracy or ask your own question.