I encountered this site today https://code.google.com/p/google-styleguide/ regarding the programming style in some languages. What would be best programming practices in Mathematica, for small and large projects ?

I think this is a very relevant question as I think it is agreed standard that having "a" coding styleguide for every project where several people write code is a very good (inevitable?) thing. It also seems to be agreed that it is more important to have a styleguide/standard than how excatly that looks like. I also am convinced that especially for Mathematica there are many details which should be handled differently for different kinds of projects and teams.

Thus instead of giving just an example of another style convention I think it makes more sense to write up a list of things that such a guidline could/should address. It would then be a second step to fill these entries with content (or probably avoid some) and probably every team/project wants to have their own details. I would prefer to not fill in specific suggestions for each entry here (too much danger of nonagreement), if people think it would make sense to work on a "mathematica stack exchange users" suggestion there is the other wiki answer from Szabolcs which could be used for that. Of course such a list will never be complete, and for some entries it might be open to debate whether they are relevant at all. I made this list a community wiki and invite everyone to contribute. My suggestion is to not delete entries which one thinks are not relevant but only give some pro/con arguments for them.

It might make sense to make requirements about which tools to use or not use, there a plenty of possibilities to write, develop, document and test mathematica code. It certainly is good to have a convention about that. Possible decisions include:

of course not all of these are independent, it is known that notebooks are not working welll together with version control systems, so making use of the latter might influence the decision about whether to use the frontend (or more precisely notebook files for code) or not...

Use of File Formats

all of the conventions made for symbol names need to be made here, not necessary with the same outcome. Additionally:

Use of Shortcuts, Parentheses and Such

Mathematica code could theoretically be written in FullForm and a team with a strong lisp background might actually prefer that. But it is full of shortcuts and many of them help to make code more readable, but with exagerated use of shortcuts Mathematica code can look like perl oneliner contest examples which would make good comic curse strings. It certainly makes sense to give some guidelines about use of such shortcuts:

Mathematica is a very "rich" language and there are litteraly hunderts of ways to achieve the same thing. It might make sense to require certain standard solutions or preferences of certain constructs to help team members to easier understand other members code, e.g.:

Everyone will have their own preferences about coding style. This is especially true for Mathematica, as most work done in this language is interactive, and until recently there was relatively little open collaboration between people that could have led to the development of standards. The existence of this site (Mathematica.SE) helped make a big progress in this area.

Let's try to collect a few guidelines which are already commonly followed in the online Mathematica community.

When there's more than one way to write something

Let me try with a few simple ("obvious"?) style guidelines I try to follow:

I found Roman Maeder' package template useful, as a general setup guide. (More comprehensive than any setup I actually use.) From Programming in Mathematica 3rd Ed. (1996), page 290. 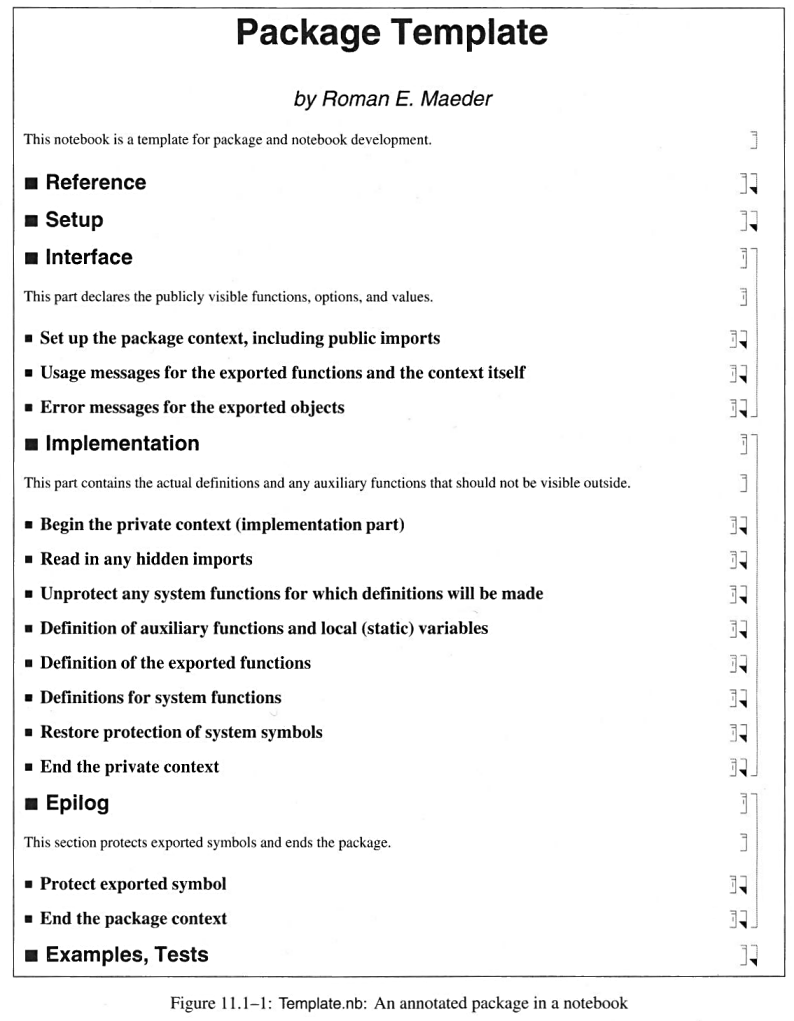 Not a general Answer, but I haven't seen such a thing in any language else. What I have found using a 1080p Monitor with the Mathematica Benchmark is: Formatting every function by indending every argument and place the commata on the first level, e.g.

improves the readability heavenly. The codebase I am currently working on is heavily oversmarted, i.e. way too long single lines. Especially since there is no clearly visible "else" I find it very important to at least give the second comma from "if" its own line.

In the excellent responses above, I find that one of my favourite guidelines is missing. It concerns the case when one has to apply one function after another.

I prefer this method because it is reminiscent of the pipeline operator in F#. And triple-clicking has never been a good friend of mine.

Not the answer you're looking for? Browse other questions tagged coding-style guidelines or ask your own question.

458
What are the most common pitfalls awaiting new users?
536
Where can I find examples of good Mathematica programming practice?
133
General strategies to write big code in Mathematica?
35
What is the difference between Set and SetDelayed?
11
How to show Plots or Graphics in mini MMA HTTP Server?
9
Naming convention for symbols exported from package
5
Is there any code formatting style reference?
3
Project and notebook design

184
Alternatives to procedural loops and iterating over lists in Mathematica
10
What is the purpose of Dump contexts?
6
More structure in Source Code/Notebooks
130
Can one identify the design patterns of Mathematica?
40
Getting serious about Mathematica programming
18
Programming Mathematica in plaintext, i.e. no formatting, non-notebook
67
Is this the most effective and efficient programming style for prototyping (a ray tracer) in Mathematica?
12
Clarify when to use Style vs Directive vs List
7
Strategies for creating links to external systems
3
Project and notebook design