Rendering a 3D volume with Image3D

I have 2D JPEG images, of 1024 x 1024 pixels, corresponding to a 500 x 500 square micron section. These images are taken from slices of tissue, each slice seperated by 10 microns. I've been trying to use Image3D to render these images, and have imported all the images, labelling them h1 to h21. I'm having some difficulty telling Mathematica what separation they should have, but I have tried using BoxRatio to get around this. So far I have; 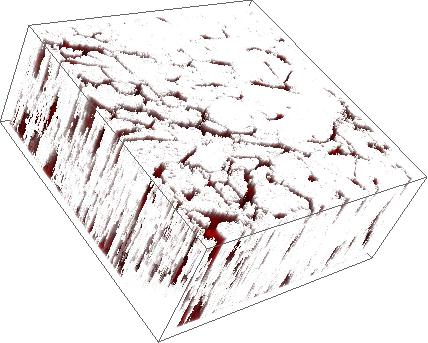 This shows the surface information, but seems to hide any of the internal information. I tried using Opacity[0.5] initially, but this did not work. Then I tried

and this didn't work any better. Is there a way to make the slices opaque, and more importantly, is there a better method to read in and render the images? Thanks!

Image3D is great, but if you want to have fine-tuned control over the opacity then you need to go to DensityPlot3D, or, in this case, ListDensityPlot3D. These are new functions in version 10.2.

In the absence of OP's data, we'll have to invent some data. OP has a set of slices that together make up a 3D object. We can mimic this using Image3DSlices, and we'll use one of the examples from that page. 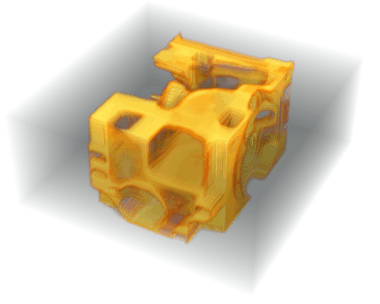 Now we could just feed these slices back to Image3D to get the original image, which is essentially what OP has done. But what I'd like to do is instead turn this into numeric data,

Now we need to deal with the opacity of the 3D density plot. DensityPlot3D and ListDensityPlot3D can take both an OpacityFunction and a ColorFunction, each of which has Scaling option. By default, the plot will feed scaled values to the opacity function, values between 0 and 1, and map these to opacity values that are also between zero and one. I have toyed around and I like using an exponential opacity function with an adjustable parameter. Here is what it looks like with a few different values of this parameter 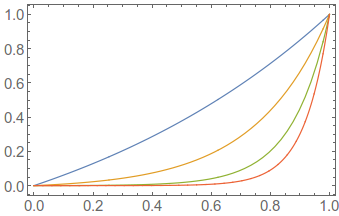 So the blue curve will scale the opacity nearly linearly with the function value (the brightness of the image), while the red curve will make only the largest values opaque.

Now let's use this opacity function with a density plot, and here I've specified the viewpoint since my machine is slow when manually rotating a 3D density plot,

By adjusting the opacity you can hide or highlight the internal structure. It's far too intensive, at least on my machine, to be able to pair with Manipulate and see the opacity changes in real time, but this may change in future implementations.

Another point, is that since this is a ListPlot variant instead of an Image3D, you can specify the DataRange or change the Ticks in any way you want.

Not the answer you're looking for? Browse other questions tagged image rendering image3d or ask your own question.

16
What is the default ColorFunction for Image3D?
4
How to represent flux in a shape
0
How is the sample 3D image of Knee is created?

4
Image3D and Graphics3D
8
How to modify tick's range in Image3D
5
Limited Opacity Levels in Image3D?
6
Image3D with values outside of the range [0,1]
7
Graphics3D and Bit Depth of Rendering
2
How to make image3d smaller? Is `ImageResolution` useful?
0
Custom Ticks for Image3D?
5
Image3D: Specify distance between image slices
0
How to show/merge multiple Image3D[] graphics?