I would like to create an interactive demonstration using Manipulate[] that illustrates a fundamental concept in pattern classification and machine learning. This problem is related to Speed up DensityHistogram rendering (display), but differs in a crucial way such that ListContourPlot will not suffice (see below).

Suppose we have two two-dimensional data sets, data1 and data2, representing "training points" from two categories. One form of (trained) classifier uses all those points to partition the full two-dimensional plane into regions myRegion1 and myRegion2, such that if a subsequent "test" point x lies in myRegion1 it is called a member of category 1 and if it lies in myRegion2 it is called a member of category 2. In general, a complex classifier will create myRegion1 such that all the points of data1 lie in myRegion1, and likewise for data2 and myRegion2. (This is called "overfitting the training data.") Simpler classifiers produce smoother, less-complex regions, and may not yield decision regions in which all of the training points lie in their corresponding regions. (This is called "underfitting the training data.") For deep reasons, it turns out that the optimum classifier should have intermediate complexity.

My desired interactive demonstration will let the user adjust a single slider controlling the classifer's complexity, and the regions myRegion1 and myRegion2 respond accordingly. (I'd also like to show the training points.)

I can create the regions as follows: 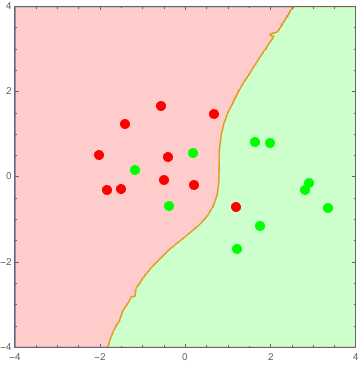 My goal is to have a Manipulate[] environment where the user can adjust the kernel size r and watch how the decision regions change in shape, and how the number of points in their "proper" regions also changes. I'd also like to use RegionPlot and Regions so the code can automatically count the number of points in their proper regions, using RegionMember[] applied to data1 and data2. (This will show how the classifier error on the training data depends upon the complexity, i.e., upon r.) That's why I can't use some other plotting functions such as ListDensityPlot[].

I can create such an interactive demonstration, but it is FAR too slow. (Moreover, I often get error messages and the regions cannot be computed.) I'm seeking tricks that will avoid these error messages and allow the user to see the effects of a change in classifier complexity rapidly... ideally within 0.5 seconds or so.

There are many obvious tricks I've tried, but they seem to give Mathematica problems. One obvious trick is to define myRegion2 as RegionDifference[myBackgroundRegion, myRegion1], where myBackgroundRegion is a simple square covering the two-dimensional area of interest. However Mathematica gives error messages so I define myRegion2 explicitly, as in the code above. Other tricks are to set discrete values for r, e.g., {{r, 1}, .5, 2, .5} so that there are just a finite list of values. Likewise, standard tricks such as AutoUpdate -> False do not sufficiently speed the region calculation and rendering. Likewise I tried DiscretizeRegion[].

I've found that SmoothHistogram[] may be faster than SmoothKernelDistribution, but alas there seems to be no direct way to "subtract histograms," so as to find the boundary between myRegion1 and myRegion2.

I'm not wedded to using SmoothKernelDistribution if some faster method can be devised. The only strict requirements are that the classifier boundaries be smooth (so nearest-neighbor or other discrete methods are ruled out) and--most importantly--the Manipulate[] interactivity is fairly fast.

I suspect I'll have to pre-compute figures for different values of r and have the user merely display the figure having a particular r--like flipping through a flip book or scrolling to a frame in a movie. But before I give up hope and make such a database of pre-computed images, I thought I'd see if anyone can solve this programming problem.

The biggest issue you are running in to is that you have to recompute the density estimates each time you sample a new point. You need the estimators to be pre-evaluated.

I have a preference for KernelMixtureDistribution because it is symbolic and exact rather than linearly interpolated which really starts to matter with higher dimensionality. The following block of code pre-evaluates the densities and PDFs so that they need only be computed once for each bandwidth h. This allows you to move the slider in real time (though it is still a bit choppy due to performance goal settings).

Not the answer you're looking for? Browse other questions tagged plotting probability-or-statistics machine-learning or ask your own question.

0
kernel density estimation
1
Maximum Likelihood estimation
4
Weighted Data within Classify and Predict (or NetTrain)
0
Estimation problem using FindMaximum
10
How to inspect the learned ClassifierFunction decision tree model?
0
How to Sample from a Probability Density Function
1
2D kernel density estimation (SmoothKernelDistribution) with bandwidth estimation: what are the values that Mathematica chooses?