Let' s take a most simple example for a polar plot, the Archimede's spiral.

How can I use here RegionPlot for the area between the two red arcs?
It takes two parameters as input and here there is only one to be given (by #3) and I could not find out a way to circumvent that.
As I want to practise with the new Region Properties and Measures MMA V10 functions, an answer using RegionPlot of region which can be reused for RegionMeasure (for example) is needed.

As this question had been asked while I had a MMA 10.0 version and did not get an answer after many weeks I’ll provide my own borrowing from comments received then and new elements after my upgrade to subsequent versions of MMA. 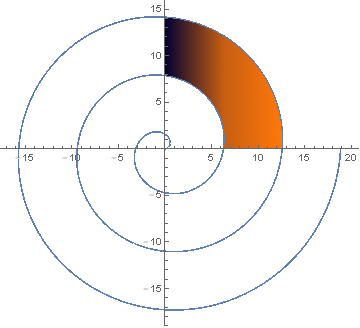 I know what to expect as the right figure can be obtained with a double integral, probably available since the early MMA versions.

With MMA 10.0 I spent hours to understand where my mistake was (because I thought there was one) and find a bypass, eventually giving up. Lo and behold after my MMA upgrade, the same code runs now OK!

This time, I knew better, contacting Wolfram support which acknowledged there was a problem and forwarded to the development team.

Any parametric coordinates can be transformed into cartesian coordinates, here put into an ImplicitRegion expression:

No loop here as before but an error straight away. MMA currently cannot handle this. However the next steps were fruitful:

And a final plot to visualize the answers above and to assure oneself of their correctness: 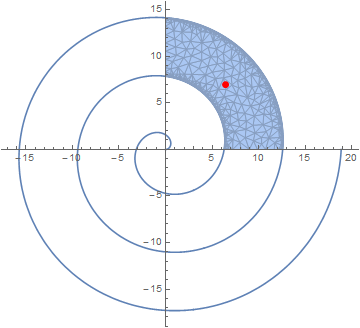 My conclusion is that at least for the new functions I was interested in and even afer two successive MMA versions they are still error prone which is most frustating.Is it reasonable to expect corrective updates in the near future?