How to cut a thick curve in half lengthwise?

Is there any easy way to cut a thick curve in half lengthwise? Example: suppose I have the cardioid shown in the figure below, is there a way to delete either the inner or the outer portion of the curve along the dashed line? Thanks for reading!! 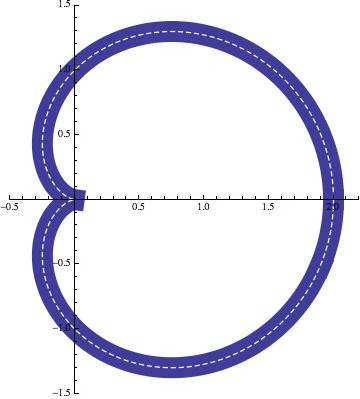 Since you said "Or", I will do the inner one. you can do it like this: 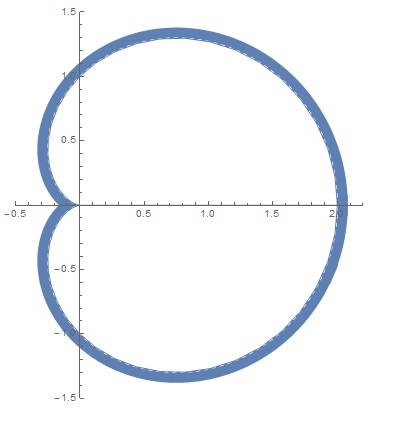 For the outer one "Also can be used in general for inner and outer" you can use: 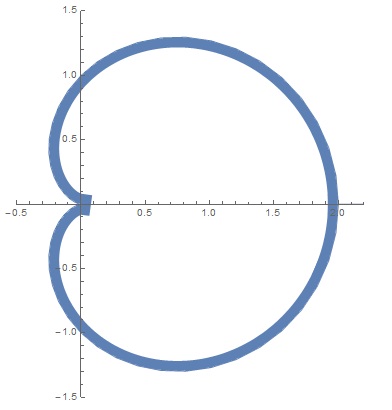 If you really need a Graphics object that represents a "sliced" version of the boundary curve (instead of just hiding one half of the line as in Algohi's solution which I also upvoted because it's easier), then you can achieve that as follows: 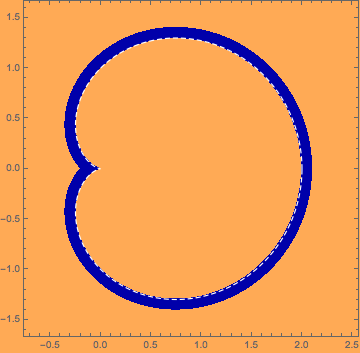 After reproducing the definitions of g and h from the question, I extract the boundary points of the parametric curve from g and use them to define a geometric Region by turning them into a Polygon for which we can then compute the signed distance in the function rdf. The function SignedRegionDistance yields 0 when you're on the line defined by the original plot g and h, and has a positive value outside that region. This can be used to impose a desired thickness in the RegionPlot that I store in the result rp, which then consists of a polygon that describes the desired shape with the desired thickness, but is outlined only in the outward direction.

To show that the graphics object is indeed the desired longitudinal slice, I superimpose it on the dashed parametric curve h with an added background that proves that nothing was hidden by overlying opaque regions.

The quality of the polygon can be changed by adjusting the PlotPoints option in RegionPlot. If necessary, you can also extract the polygon from the RegionPlot by doing First@Normal@rp.

51
Vary the thickness of a plotted function

2
Illustrating half life
8
Cut out circle out of circle
8
Where is the other half of my fourth degree Bézier curve?
11
Draw half empty rectangle
1
Color each half of a disc differently
6
How to count points under the curve?
3
How to draw graph consists of nodes with half edges attached to them?
20
How to make this Dragon Curve?
6
Draw half arrow