Real Numbers in the Wolfram Language

Much of the discussion in the answers below revolves around the distinction between Real as a data type and real numbers as a domain or class of numbers (irrespective of the form in which they might be embodied).

This is more of a request for advice and input than a solution to a programming challenge, but I thought it might be useful to raise here nonetheless.

In mathematics, the domain of real numbers is loosely thought of as all the points on the real line (http://en.wikipedia.org/wiki/Real_number).

What real numbers are, according to the symbol, Reals

In Mathematica, the term Reals is said to represent the domain of real numbers. [Update] And as Yves Klett and Szabolcs note, this is consistent with the mathematical definition of the domain.

The following shows that Mathematica recognizes the symbol for the golden ratio to represent a real number, in this sense.

What real numbers are, according to the symbol,Real

The head, Real, however, is employed expressly to designate floating-point numbers.

The definition is: "Real is the head for real (floating point) numbers".

This definition appears to conflate the domain of real numbers with floating point numbers.

Integers and irrational numbers are not floating point numbers. So they would not, according to this view, be considered real numbers. 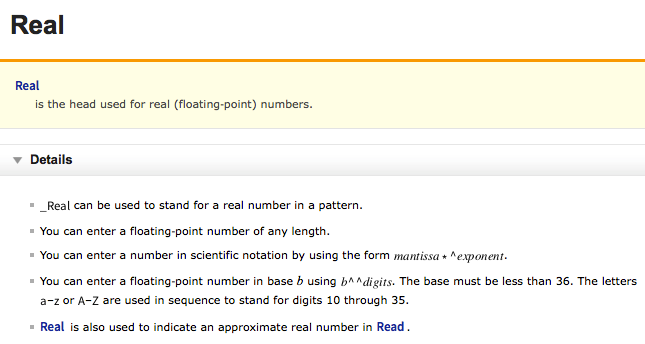 If the head, Real, indicates that a number is a floating point number, not a real number, why not create the head, Float, to serve that purpose?

It seems to me that it would be advisable to eliminate the head, Real, from the Wolfram language. The head, Float, would fit the bill much better. Then Reals coud be properly defined as including rational numbers (including Integers), and irrational numbers.

I realize that it is rather late in the game to be rethinking fundamental objects of the language, such as real numbers, but now that regions have been formally introduced, in version 10, it seems that it will become increasingly important to be clear and consistent in the specification of number domains.

In some settings the integers, fractions, rational numbers, reals, and complexes are five distinct systems. Further, for reals and complexes, there are the standard reals and complexes as well as nonstandard systems. There are mappings from some to others, so that a subset of the reals in an isomorphic image of the integers (as rings), and so on for ${\bf Z} \subset {\bf Q}$, ${\bf Q} \subset {\bf R}$, ${\bf R} \subset {\bf C}$, and so on, where $\subset$ denotes a canonical injection. The rationals are also a natural homomorphic image of the fractions under the standard equivalence relation. In a math class (as opposed to a mathematics class), these things are all conflated, from school through the university courses that scientists and engineers take, and they are all thought of as belonging to same big set of "numbers." In a computational setting, there is a different sort of division depending on data types that correspond to hardware/software abilities, in which some things are exact and some approximate; there is always some truncation of the mathematical set (with respect to which numbers are actually representable). Computationally in school, you even get $\pi = 3.14 = 22/7$ sometimes; in the Indiana legislature, it was once proposed that $\pi =3.2$ would be a more convenient value.

So, while I think it's a pretty cool question, I don't think I'm up to fleshing out all the subtle distinctions a truly complete answer would have to make.

But one thing is clear, the type Real does not satisfy the properties of the real numbers. The following are inconsistent:

Whatever the computational reasons underlying them, the results, except for the first, do not represent what happens with (mathematical) real numbers.

As for the domain Reals, I'm not convinced it represents a complete implementation of the real numbers as a logical system. I think it is primarily a way to specify a domain for exact algebra (as well as approximate numerics). For instance, I tried to specify and verify the least upper bound property but got stuck. Resolve did not seem to know how to deal with Subset[S, Reals] and Element[x, S] in the same statement. I'm not convinced that Subset[S, Reals] is a proper way to use Subset.

In practical terms, Mathematica is put out for use by mathematicians but also for use by those in many other fields. I'm not bothered by the term Real being distinct from "real", and I find "real (floating-point)" sufficiently clear to me, who knows what floating-point means. The case for or against calling approximate reals by the name Real ought to be based on the usefulness to the users who do not know what floating-point numbers are. If some are mathematicians, and some probably do not know numerics, they might be confused. For others who do not know about the axiomatic number systems of mathematics and think of reals numbers in terms of pencil & paper or what they see on their calculators, it might be easier for them to think of the Real numbers as real numbers.

I suspect the reason Wolfram did not choose Float is that compared to something like C, when Mathematica first came out, arbitrary precision was only available in specialized libraries (AFAIK). Arbitrary here means a user-specified finite amount, but that was an advance over machine floats that have a fixed precision. I would argue that they are closer to modeling the reals than C floats. They come close to an implementation of the computable reals. (I hedge a little because there is much to think through and verify to make an absolute statement.) Sometimes I wish machine reals and arbitrary precision reals had different heads, but we have MachineNumberQ to distinguish them when necessary.

As noted in post, responses and comments, Real is a Mathematica head and, as such, is distinct from Integer and Rational and Complex. All of these are regarded as "atomic" (notwitstanding that Rational has two Integer "parts", and Complex is comprised of any mix of the other three types).

These atomic types are in a sense distinct from the domains one considers. For domain purposes there are Integers, Rationals, Reals, and Complexes. By no means do all functions work with a notion of domains but some, such as Reduce, do so. Also these are good for inclusion testing in the sense that they conform to mathematical view of belonging: 3/4 is in Reals, for example. Well, there are edge cases. (Is 1.0 an integer? Mathematica gives its best attempt at "no comment").

It's probably safe to assume that there will also be edge cases when it is difficult to determine whether an imaginary part is or is not zero. These might or might not hinge on what PossibleZeroQ does, I'm not sure.

In light of all this, a plausible test for expr being real might be TrueQ[Element[expr,Reals]]. I do not know if this will play nice with Assuming or $Assumptions and do not have time to experiment, so I'll just mention that it might even be useful to enclose the above in Refine[]. Also there may need to be special handling for cases where one encounters a 1/0 type of infinity, e.g. a limiting value that is everywhere real off the point in question (and whether this should be regarded as real or not is likely to be problem-specific).

Couple of additional or summary points. This is a great question for the 21st century.

Not the answer you're looking for? Browse other questions tagged numerics core-language number-representation or ask your own question.

10
Forcing FindRoot to return only real solutions
1
Set theoretic operations on sets of real numbers
4
Fixed-Point Numbers in Mathematica
11
Does Mathematica have an equivalent of Python's float.as_integer_ratio?
16
Does Mathematica have an equivalent of C's nextafter?
5
Compilation, square roots, and integers
6
Is there a command that does exact numerical conversion of non-exact to exact numbers?
17
Distinguishing Wolfram Language and Mathematica, the software
2
A probable misdescription of official Doc about $MachinePrecision?
2
Rounding Real number