Extracting ragged array from an image

I have a list of points, which represent positions of peaks in an image. The nature of the image itself shouldn't matter, as I already have the peak positions.

As a simple example, consider the following code, which produces the image below. 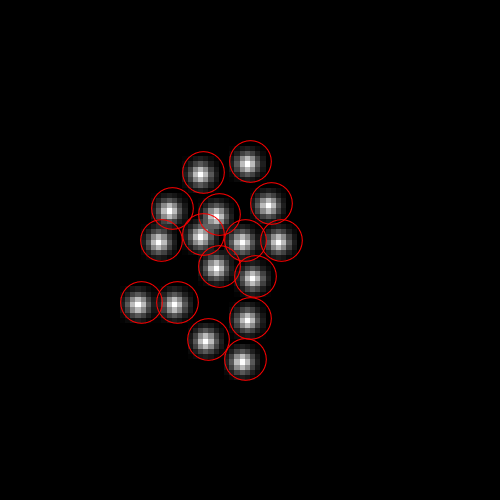 I'm interested in extracting the region of the image around each point, which will be a ragged array. (I don't want square patches).

I'd like the result to be a list of the $(x,y)$ coordinates of the pixels contained within each region.

For example, I've added some red circles around each point.

MorphologicalComponents is one way to do it, as, of course, instead of drawing the points as Gaussians, I could draw them as circles. This can be extended to retrieve the pixel coordinates within each region. 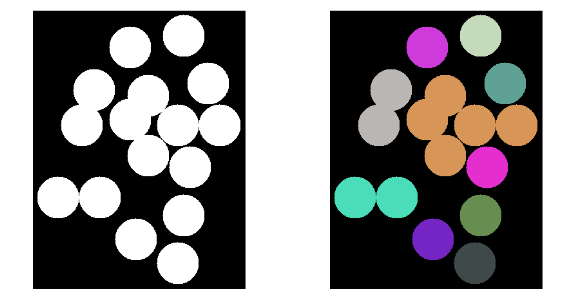 Although if the graphical approach using MorphologicalComponents is the most efficient, then so be it.

Here is a graph based solution. However the result (the pixels) will be dependent on resolution, and this solution currently uses the lowest resolution possible.

Some work may be saved by only traversing the upper triangular of the matrix and then reflecting that portion, since the adjacency matrix is symmetric. Get the circles which are connected:

And finally a visualization:

I would work purely on the list of points. You have the radius r, so you can easily identify connected regions with

(see that I used radius-1 because we already have a point!) 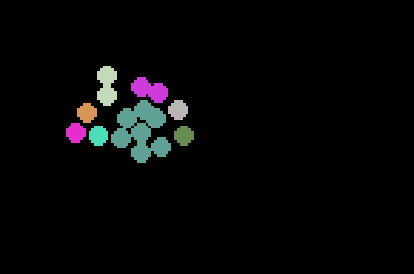 Since the labels in the component image always run from 0 (background) to the highest component number, extracting the positions of the each region is as simple as 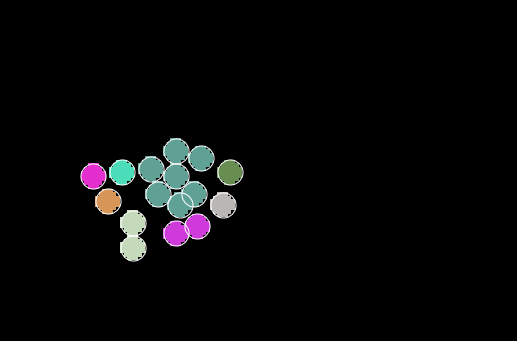 Not the answer you're looking for? Browse other questions tagged graphics computational-geometry or ask your own question.

22
Subplots with connector lines
4
Draw network graph and get the coordinates of each node
3
Intersecting/Overlapping Image Elements Counts?
4
Undesired resizing with ImageMultiply and Masking
1
Remove color artifacts in overlay of several Graphics objects?
13
Project map to a particular shape
2
How to prerender / rasterize a graphic without losing location information
2
Plotting large scale image embeddings
3
Computing the intersection area of two disks in 3D
2
Colour region by some property