To find the color values used in a plot, I was using Sow as shown here:

But I get an error if I simply replace Histogram3D by

Now I get the following message: 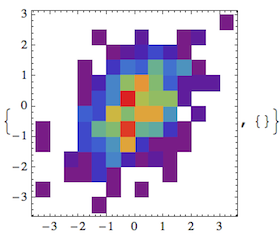 It's possible to work around this problem by doing without Sow and Reap as follows:

But it would be nice to know if there is an explanation for why Sow doesn't work in the DensityHistogram example whereas it works in Histogram3D. The same error appears if I leave out the Reap.

From the message it seems clear that a list of all PlotRange tuples is being sown at some point before the ColorFunction actually is put to use. I tried to suppress passing that kind of argument to Sow by modifying the ColorFunction to

but it had no effect. As Leonid pointed out in his answer, there must therefore be a different invocation of Sow outside the color function.

Maybe someone knows another way to suppress the invalid ColorFunction call that seems to trip up Sow. However, it doesn't seem to be obvious because when I don't use Sow as in my work-around based on AppendTo with a list l, there is no entry in the resulting list l that corresponds to the PlotRange tuples.

None of these issues arise with the related function SmoothDensityHistogram.

Leonid pointed out what the probable cause for the Sow error is, but since wrapping the result in another Show, I would for now stick with the workaround I mentioned above: ditch Sow and Reap, and use AppendTo to collect the desired values in a list l using a CompoundExpression of the type AppendTo[l, #]; #.

This looks like a defect in the implementation. Here is a simple test:

And here is a fix:

Not the answer you're looking for? Browse other questions tagged plotting bugs color or ask your own question.