From the project write-up:

Question 1: Assume the IRA pays (continuously) at a risk-free annual interest rate of 4%. In this case, the balance B is described by the IVP:

Easy to solve but I've included it so that those who answer know the context of the project and are financially-savvy. The next part involves the stochastic process:

where dW(t) is the (standard) Wiener process (i.e., Brownian motion) and v is a measure of the volatility. (In effect, this makes the interest rate follow a Brownian motion path, wandering around 4%. The larger the volatility, the faster it wanders.) Thus the IRA’s balance is described by a stochastic Ito equation saying

In Mathematica, I've described this equation as proc1. The WienerProcess[0, 0.25] implies 0 drift and 25% volatility.

data1 is the RandomFunction using proc1 as its process with from 0 to 20, applying the process at every 0.01 step. It does this to generate 50 "walks" and returns the TemporalData[] structure associated with this RandomFunction

I've never seen TemporalData[] before and what I've seen in the Function Navigator hasn't been helpful to me.

What I'm trying to do:

So far, I've been working on the single element case:

I subtract 1 from lifetime to account for the initial condition.

It seems to work, but I can't seem to extend it to cover all paths. Any help with this would be greatly appreciated.

If you have version 10 or higher you can use a combination of TimeSeriesMap and TimeSeriesThread. 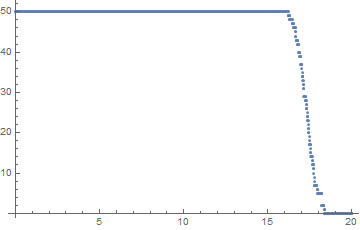 The total tot is a TemporalData object so we could use the "SliceData" property to obtain the number of paths at a time t that have positive state.

However, since there is only one path, it makes sense to convert to TimeSeries for easier processing...

Sorry for the horrible coding practices, but I couldn't get it to work otherwise.

Now that I have the lifetime of each path in a list, its easier to tell which paths exceed a target lifetime using Select[]

Not the answer you're looking for? Browse other questions tagged list-manipulation random temporaldata or ask your own question.

191
Alternatives to procedural loops and iterating over lists in Mathematica
59
Are there any cases when For[] loops are reasonable?

4
Delete Missing data from coordinate sets
1
Why does RandomFunction return variable number of data points?
13
Regime Change Stochastic Process
2
Extracting specific data from a list
1
Extracting the elements from a loop of sets/ lists
3
What is a proper way to represent multidimensional data in TemporalData?
1
Conditionally extracting data from long lists