What is the difference between Evaluation ► Quit Kernel and Quit[]?

Both seem to quit the kernel (and clearing all definitions).

You cannot Quit kernel while evaluation is still running: the Quit[] command will be placed in the queue and executed only after finishing of evaluation of all the previous inputs. In contrast, Evaluation ► Quit Kernel will quit the kernel immediately even if it is still running.

As Kuba noticed in the comments, via "Preemptive" link it is possible to inject the Quit[] command into running kernel, for example via Button:

The difference is the following:

When you call Quit[] as input in a notebook, then the front end sends this command over the main MathLink connection to the Kernel like any other input. If you are already evaluating a long-running (or hanging) command, the Kernel won't quit because (as Alexey already pointed out) the quit command is queued and waits until the current evaluation has finished.

The front end menu Quit works completely differently: It uses inter-process signals to tell the kernel that it needs to quit. Btw, the same approach is used to interrupt an evaluation. Let me give an example and show you, that you can send those signals yourself. From here, I'm using LinkSnooper to show you the communication between Kernel and Front End. I have started my LinkSnooper-Kernel and I'm evaluating While[True] which runs and runs and runs... The input is sent to the Kernel as EnterExpressionPacket:

SIGINT: The SIGINT signal is sent to a process by its controlling terminal when a user wishes to interrupt the process. This is typically initiated by pressing Control-C, but on some systems, the "delete" character or "break" key can be used.

The Kernel interrupts his evaluation and sends the following packet back to the Front End MenuPacket[1, "Interrupt> "] which make the Front End to show you this nice dialog 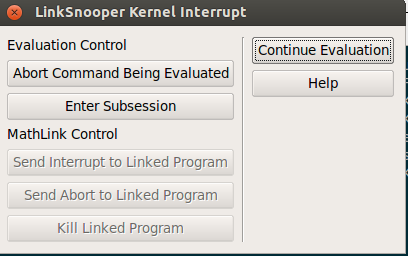 If you press Abort then the Front End does nothing more than sending a plain "a" to the Kernel. You can see the exact same communication when you work in a terminal Mathematica session. Let me show you

Note that the ^C is the Ctrl+C I was pressing which is described in the SIGINT doc above.

When you make a menu-quit, you see through the same inspection that the Front End sends the signal 1 to the Kernel which is

SIGABRT: The SIGABRT signal is sent to a process to tell it to abort, i.e. to terminate. The signal is usually initiated by the process itself when it calls abort function of the C Standard Library, but it can be sent to the process from outside as well as any other signal.

The really helpful thing is, that you can always send those signals to the kernel process, even if the Front End hangs completely. Unfortunately, I don't whether this works in Windows the same way it does in OSX or Linux, but I'm sure someone can find out.

Anyway, let's try this in Mathematica V10 (which doesn't has the interrupt button anymore). First, I'm extracting the process id that the Kernel has with $ProcessID (it's 7005 currently here). Now I go

and bang, the above Evaluation Control dialog pops up. Clicking on Continue and using kill -1 7005 and the Kernel quits.

While Quit[] is a normal kernel function which makes that the kernel exits by himself, the menu uses signals that are send to the kernel process.

Not the answer you're looking for? Browse other questions tagged functions evaluation kernel function-comparison or ask your own question.

8
Why does it take so long to Quit?
8
Why can't I abort main evaluation from ScheduledTasks (Service Link)?

6
How is the Mathematica kernel structured internally, and how does evaluation work?
16
Another difference between Set and SetDelayed. Evaluation shortcut?
5
Clean webMathematica Kernel
8
Why can't I abort main evaluation from ScheduledTasks (Service Link)?
1
Parallel evaluation hangs before doing anything
20
Quit the Kernel and start new session automatically
13
Handling Kernel quit