in which parts of the letters sometimes appear almost as light as the background, my goal is to determine the $x$-positions of the centres of the bounding boxes of the characters, to uncover the monospaced text grid.

The problem is that, due to the bad quality of the scan, a binarization either disconnects pars of letters that belong together, or connect letters that should be considered separate component. Using MorphologicalBinarize[ColorNegate[#],thres] has given best results so far:

but this result is unsatisfactory.

My question is: What is a good way to separate the letters, in order to find their centers and recover the horizontal grid. The shape of the characters does not necessarily have to be saved in this step.

More lines like the example can be found at https://www.dropbox.com/s/ghlyxl6l1rop41s/lines.zip?dl=0.

Assuming that it is always a monospaced font, sum the image in both axes.

The resulting lists can be easily searched for peaks and valleys estimating the centers/edges of bounding boxes. 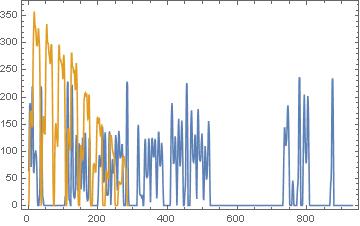 Not the answer you're looking for? Browse other questions tagged image-processing ocr or ask your own question.

15
Poor results with ImageLines function
20
Segmentation of sunspots
23
How can I detect if an image is of poor quality?
15
Trainable WEKA segmentation of images
5
Grayscale Morphology
4
How to improve the recognition quality when TextRecognize work on single character
2
Signed distance function from grayscale image
0
Join grayscale image with matrix plot
3
Video segmentation