In Graphics, a button without action will not work?

Button is not a Graphics primitive or directive.

But if you drop Graphics@ part in the code above, generating a button:

Then you edit the output, simply apprending Graphics@ to it. And viola! 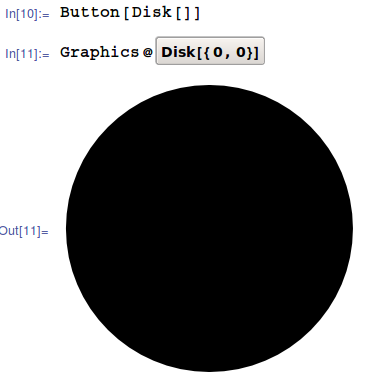 I have no idea why this aproach will work but the code won't.

So is this the correct behavior? Can we call this a (tiny) bug?

By the way, the error message is actually very misleading. A button that really does something (anything) will work perfectly well in Graphics. For example:

On the Documentation pages both for Graphics and Button only the two-argument form of Button is mentioned as a wrapper allowed inside of Graphics. So I would not say that the behavior you describe contradicts the Documentation.

From the other side, for what purpose may you need a knowingly inoperative Button inside of Graphics? This approach looks like a wrong idea on its own, so I would not complain that it produces an error message. Button without the second argument is just a useless wrapper and the error message correctly warns that you are doing something wrong.

You have already provided an easy workaround - simple addition of the second argument of Button (even Null) "fixes" this: Graphics@Button[Disk[], ] does not produce the error message.

So there is nothing that can be called even a minor bug.

Why then your workaround through editing the output by prepending Graphics@ to it works? Let us see what the output Cell actually contains by appending //InputForm and evaluating inside of a Notebook: 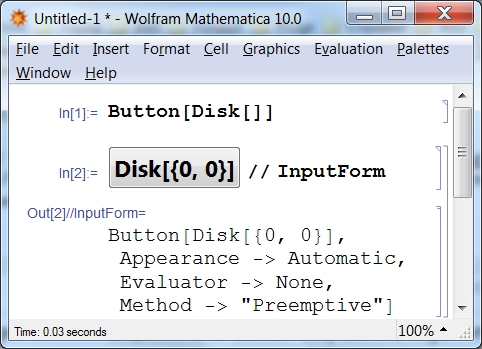 You see that the Button in the output Cell actually contains four arguments (but it is still the one-argument form of Button with options appended)! So the explanation is simple: Mathematica simply checks if Button contains only one argument and complains in this case. It seems to be the intended behavior but poorly implemented: more general case of one-argument Button with options was not considered by the developer. So it is not a bug, just careless without harmful consequences.

Not the answer you're looking for? Browse other questions tagged graphics button or ask your own question.

524
What are the most common pitfalls awaiting new users?