Combining two SmoothHistogram plots without normalization of each

I'm trying to plot a density of states out of a list of energy values, and on it I want to include another over-layed plot with it that shows some fraction of that density of states at different values, that I have as another list. I've been doing this with the SmoothHistogram function, which gives the correct shape of the plot, but the normalization of each plot screw up what I'm trying to accomplish. Is there any way to make a SmoothHistogram-like plot without normalizing the integration of my data? I've attempted plotting a single gaussian for each point in my list, but it takes a long time to plot it like that. Each list can be thousands of elements long.

I want the plot of list2 to be some fraction of list1, and SmoothHistogram normalizes each plot before over-laying them.

Im not sure exactly what you are after, but here is a trick to rescale the SmoothHistogram result 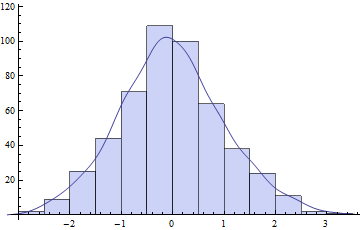 Not the answer you're looking for? Browse other questions tagged plotting probability-or-statistics or ask your own question.