How to create a complex variable from dated list values

Can anyone help me to construct a variable "PI" from values of variable x. Variable x represents a group of two time series rj and ri on equal dates(joined two dated lists with states).Variable x have about 2000 observations. Example of variable x: 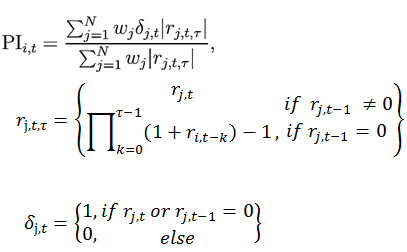 Delta is a dummy variable that takes value 1 if the value of variable rj on current date or date before have value 0. If rj is different from 0, delta should be 0, such that the numerator of PI takes value 0. Variable w represents a weight and have a form of list of equal values for all x dates. For example 0.5 for all 2000 observations. It could be treated as a constant, say 1, or thrown from PI formula.

Summation of numerator and denominator of PI variable should be done for one business week-5 days(Mo,Tu,We,Th,Fr). Variables rj and ri are already paired values on equal business-trading day, so PI should represent a measure that would refer to one week.

15
Assigning values to a list of variable names
10
Better solution than returning a list of 3 values?
1
Add a letter to a variable name from a list
1
How to select states with equal times
1
How to form a variable from matrix elements
0
Create list of elements with dependence on a variable
6
Create local alias for variable
6
How to create a variable List
9
Create Array from list of indices/values
1
Create a table from a list with lag values