In ordinary mathematical terms, all that we can say, as of now, is that either there does or there does not—and we do not know which! This would seem to be a harmless enough statement. However, the intuitionists would actually deny that one can validly say "either there exists a succession of twenty consecutive sevens somewhere in the decimal expansion of $\pi$, or else there does not"—unless and until one has (in some constructive way acceptable to the intuitionists) either established that there is indeed such a succession, or else established that there is none! A direct calculation could suffice to show that a succession of twenty consecutive sevens actually does exist somewhere in the decimal expansion of $\pi$, but some sort of mathematical theorem would be needed to establish that there is no such succession. No computer has yet proceeded far enough in the computation of $\pi$ to determine that there is indeed such a succession. One's expectation on probabilistic grounds would be that such a succession does actually exist, but even if the computer were to produce digits consistently at the rate of, say, $10^{10}$ per second, it would be likely to take something of the order of between one hundred and one thousand years to find the sequence!

We shouldn't restrict to the decimal digits of $\pi$, but preferable solutions should work with any finite numbers of digits any transcendental numbers, e.g. $e^\pi, {\sqrt 2}^{\sqrt 3}$, etc.

A step by step method not fulfilling expectations

In case of $\pi$ we could e.g. try something like a "step by step" approach:

Here we found only succsessions of length 9, so it is not exactly what I wanted but it helps to understand why this method suffers from time and memory problems, often yielding

A "step by step" is too time-consuming because Mathematica needs to compute first decimal digits every time we want to proceed to the next step and the access time depends roughly linearly on number of steps, e.g. :

Maybe some Reap and Sow approach or whatever else?

While we wait for an MMA implementation of BBP formula to generate the digits of Pi, we can use published results to identify repeated digits and their locations. Searching through the one billion digits of Pi in the file pi-billion.txt, in chunks of 10 million digits, with built-in function StringPosition: 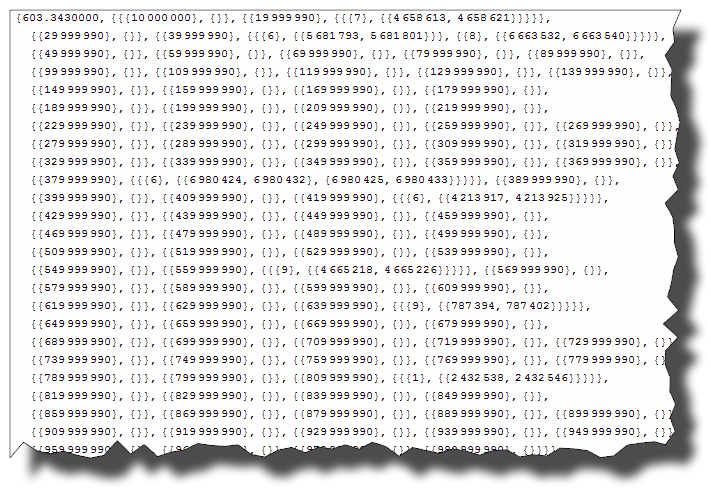 Clean up the output and calculate the actual positions (subtract 1 to account for the decimal point):

Since StringPosition, by default, includes overlaps, we can conclude

That is, check that the following yields True:

Not the answer you're looking for? Browse other questions tagged performance-tuning memory number-theory or ask your own question.

64
Torn edge paper effect for images
10
Count consecutive occurrences in a list above a certain value
5
How do I get a list of digits for a number?
1
How to visualise an iterative approximation to pi
1
check a sequence in Pi
2
Help: Obtain a huge amount of data solved in FrobeniusSolve? (perhaps better without running FrobeniusSolve?)

3
Most efficient way of splitting a file into length-prefixed blocks
14
Numerically evaluating an integral related to Cantor's staircase
8
Using NDSolve`StateData without processing it into rule
3
Generation of Step Numbers
5
Reading total number of frames in an AVI
6
Extracting binary digits of machine precision numbers
11
Find if there are consecutive 1s in a binary representation of a number
5
Is there an efficient way to calculate last digits of this sum?