Bug in Operator Form of StringCases

According to the documentation there's an operator form for StringCases

Here is the normal form

Indeed, StringCases does not have an operator form in 10.0.1. The documentation and usage message appear to be in error.

StringCases does not appear on the list TypeSystem`$OperatorForms -- although that is by no means conclusive as discussed here. I would argue that it should have an operator form, in symmetry with Cases. In any event, there is a bug here either in the documentation or in the implementation of StringCases.

Note that operator forms for functions like StringCases and Cases pose some problems. For StringCases, there are two arguments that could credibly be curried: the pattern and the occurrence count. But if the caller specifies two arguments, it is ambiguous whether it means StringCases[patt, n] or StringCases["string", patt]. Such are the pitfalls of idiomatic currying when the arguments lists were not designed with currying in mind.

None of this reasoning conclusively argues against the single argument operator form which has reasonably unambiguous meaning. Further more, WRI have already elected to give Cases an operator form even though the currying situation there is even worse, with three arguments that could be curried (pattern/rule, levelspec, occurrence count). 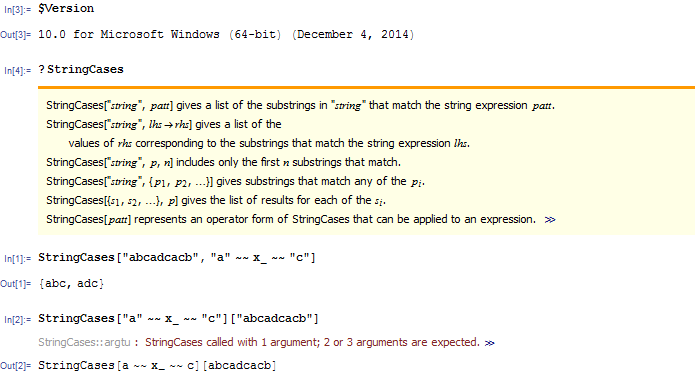 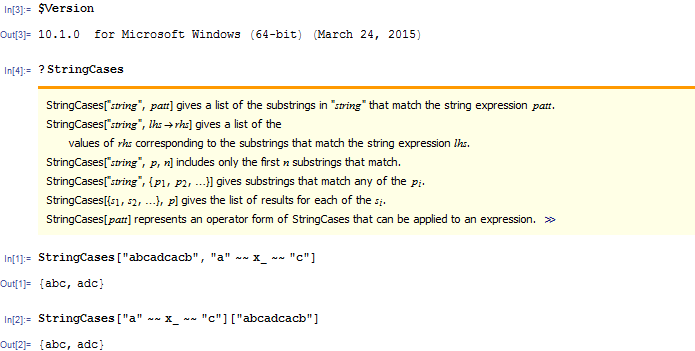 Not the answer you're looking for? Browse other questions tagged bugs string-manipulation documentation or ask your own question.

34
Is there a comprehensive list of functions with operator forms?

12
Is there a bug in AssociatePairs?
11
Probable Bug in HighlightMesh with 2D Convex Hulls created via ConvexHullMesh
12
Possible Bug in DiscretizeRegion with Option MaxCellMeasure
10
Is this a bug in NIntegrate?
25
StringCases is Confused with Patterns in Version 10.0.1
24
A documented syntax of FileNames doesn't work?
30
Save as pdf broken in version 10.0.2?
14
Min, Max are slow on TimeObjects
8
LogisticSigmoid residue bug?
16
Possible Bug in ArrayMesh