Consider the following piece of code from Heike as an ( accepted ) answer on LocatorPane, selecting multiple Locators - Basically the code implements dragging polygons on a LocatorPane.

If you run this code you'll notice that when a locator's position is on another polygon the locator does not work anymore.

Question: How can the code above be changed so that a click on a locator always works? Why was it necessary to use two two EventHandlers, and what is a good rule to decide on wether to use the PassEventsDown option?

The following code does what you want. It requires that you press shift to move a locator that is being overlapped by a polygon, instead of moving that polygon. 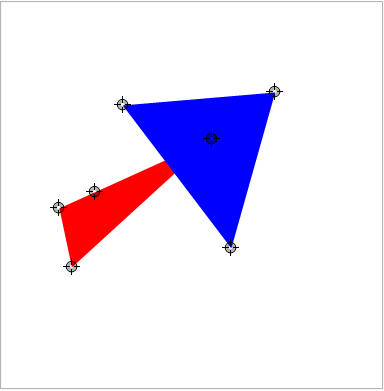 I'll first explain the causes of the unwanted behavior and then explain my solution.

At the base of the problem lies the fact that LocatorPane needs to get its own events, the clicks on the pane that (re)set the position of the locators. The 3 (not 2, if you look closely) EventHandlers get priority above the LocatorPane when you click in their elements. If you don't do a PassEventsDown->True LocatorPane won't see the event at all. It'll be eaten up by the handler. However, if you would pass down the event to the LocatorPane it would set a new position for the locator while at the same time the polygon is being dragged. You get a very erratic result.

My solution consists of the following:

Not the answer you're looking for? Browse other questions tagged graphics programming dynamic or ask your own question.