How to build a bvh (a motion capture file format) player in Mathematica?

How to build a bvh player that can be used to visualize human motions in Mathematica? Any idea or sample code would be appreciated.

TL;DR: A package (Mathematica v10) can be found at the very bottom of this post.

6: Tiny update: Import can now use the ".bvh" extension to determine the import type. The code that does this is ugly, but I don't see any other way at the moment.

5: Added error checking and registered the package as an official importer for "BVH" files, so an intermediate importing stage is no longer necessary:

4: A major update. I separated drawing and parsing of the file, increasing speed and user comfort in the process. Bone structure and joint positions are now determined by a separate pass through the parsed data. Separation of structure (which remains the same during the whole movie) and joint positions prepares for the use of GraphicsComplex. I used a few V10 features, but it should be very easy to work around those to get it to work for earlier versions.

I haven't updated the text in original post, but the new code does not deviate so much from the description as to make it fully obsolete, so I leave it there as basic documentation of the code.

It returns an object BVHData which is not unlike like objects such as FittedModel and TimeSeries:

Getting your BVH file processed now works as follows:

Note that parsing takes most time. Frames are processed (on my laptop) at a rate of about 200 frames/sec.

With the output BVHData object assigned to the variable out you can perform a lot of fun tricks.

The trace of all joints through time:

Same for the bones: 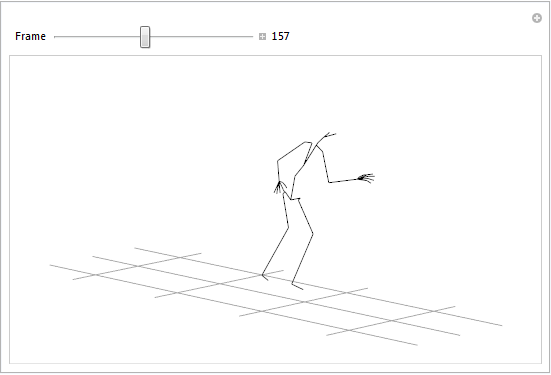 Or even generate a 3D Graph (a V10 functionality).

There are several To-Do items, particularly some options to fine-tune things would be useful. Error handling (trying to parse non-BVH files etc.) would be nice too.

The movie above was taken from the cgspeed site which contains BVH conversions of the 2500-motion Carnegie-Mellon motion capture dataset.

3: Generalized the code to work with BVH files that use different rotation orderings.

2: Fixed another bug that caused the code to run much too slow

1: Found a bug (which derived from the vague BVH format description that I used), so the OP's demo file now runs correctly:

I also re-rendered the movies at the bottom of this post, which look much better now.

First, I use the free motion cap databases that you can find on the Advanced Computing Center for the Arts and Design website. I tried the 'female1' dataset. After unzipping to a working directory I import one of the BVH files contained in it as follows:

For those who want to see how such a file looks like, check this short example file. Basically, a BVH file consists of a body description part with several nested segments, with fixed offsets with respect to the connecting joints and rotations that are read from the data fork of the file which contains the motion capture data. The following code separates these two parts:

A one-liner to tokenize the elements in the file:

Get the number of frames, frame time and mocap data section:

Notice the use of Internal`StringToDouble to convert the data in strings to reals. I don't like the use of this undocumented function, but ToExpression doesn't handle the occasional number with exponential notation (1.0e3) correctly and the V10 function Interpreter["Number"] is incredibly slow.

I define a couple of patterns to be used in later parsing:

I used these functions so that I would be able to address those pieces by their head later on. I needed that in early versions of the code, but it might be unnecessary with some rewriting.

Now the code to recursively built the body tree:

In tree form, and removing a few details, it looks like this: 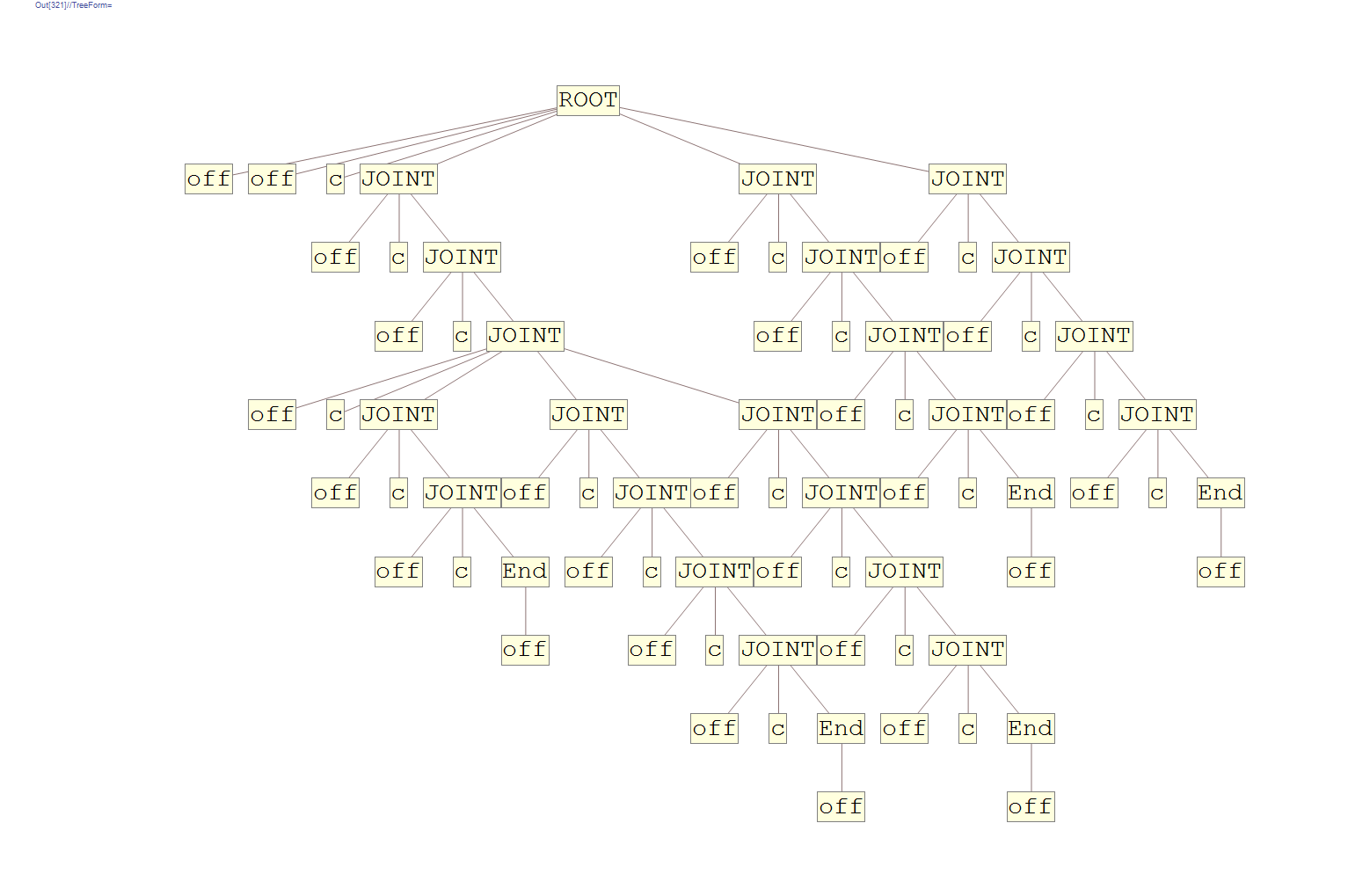 As I wrote above the BVH file is full of 'Zrotation', 'Xrotation' stuff that are merely placeholders. It is not really clear from the few not-too-precise BVH descriptions that I read, but I assume that they are to be matched with elements in each data line in order of appearance. So, I have to replace those placeholders with something that indicates their original position if they are moved around. The following piece of code does that and also takes care of the possibly varying order of rotations:

The rotation matrices. The order of rotations is dealt with in makeSlots:

Applying the actual rotations is delayed until late in the process. This is done by the undefined functions xr,yr, and zr in makeSlots. The following utility function takes care of activation when needed.

Note that so far the tree contains the passive keyword strings "ROOT", "JOINT" and "END". The above definitions do nothing until the moment I replace those strings with the actual function heads.

The non-defined slot function is replaced by Slot so as to turn the body complex into a pure function that can be applied on the lines of mocap data successively.

With all this in place the actual processing of the separate frames can be done in a simple loop. Replacing the string keywords with their defined function names activates the interpretation process. 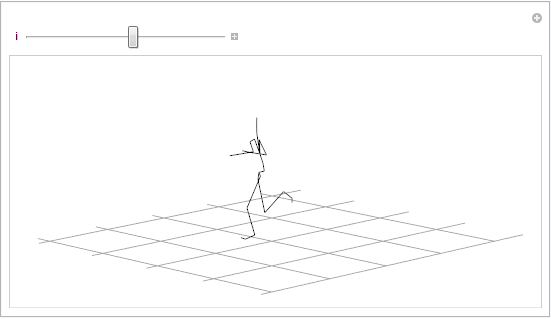 And sometimes, we might prefer a continuous motion by looping back from the end to the beginning, the code below: skip every other frames first then append the reverse afterward to obtain a loop-back motion.

The GIF below was created by using Sjoerd C. de Vries' code after chopping the original bvh file twice and applied looping-back once:

Code for creating the GIF file above:

Some of the bvh files include details of the fingers movements of the object. Like the one below, these can be deleted if one doesn't want them:

The figure can be shown as a Graph:

And use Manipulate to delete the unwant-fingers and/or bones:

And change it into a Match-dancer with the latest Tube command.

At last, I have to confess that most of the codes above were stolen from Sjoerd C. de Vries' answer to this question. And I would like to say thanks to him for his generous sharing. Studying his codes and surrounded with the inviting coffee aroma at one of the local Starbuck made my last few Saturday afternoons so enjoyable.

Not the answer you're looking for? Browse other questions tagged graphics3d import animation visualization code-request or ask your own question.

1
Make a .C3D file in Mathematica
586
Where can I find examples of good Mathematica programming practice?
632
xkcd-style Plots
58
How to create expanding summary boxes like the ones displayed for InterpolatingFunction, NearestFunction, etc.?
6
Test a wooden board's vibration mode
28
Can Mathematica be used for developing "normal" stand-alone software?
11
How to make Import recognize a new file extension?
9
Is it possible to animate a bone or a skeleton fetched from Wolfram AnatomyData?
7
Registering/detecting an importer by file name extension
9
What governs how Mathematica selects the appropriate format for an Import?
See more linked questions

2
Importing LTSpice data into mathematica
3
How to visualize music from midi file format?
2
How to read in and assign values from a txt file?