How to call a java method that takes a boolean (not Boolean)?

I'm trying to call a method on a java object that takes a single boolean argument - note boolean (native or primative) not Boolean (Object or Reference type).

Java::argx1: Method named method defined in class blah.blah.blah.Object was called with an incorrect number or type of arguments. The argument was True.

Various experiments with MakeJavaObject fail for the obvious reason they build True on the Mathematica side of JLink.

Let's make a test by ourselves. The class java.lang.Boolean has a static method

that takes a primitive boolean and returns a string. Here we go:

So my educated guess is that your method does not take a single argument as the warning already tells you.

I considered this a simple mistake of the OP, but @Picket gave a minimal example in a comment, that fails on his machine

I took the time to download the JSoup library and tried it myself. Mysteriously, it works on my machine 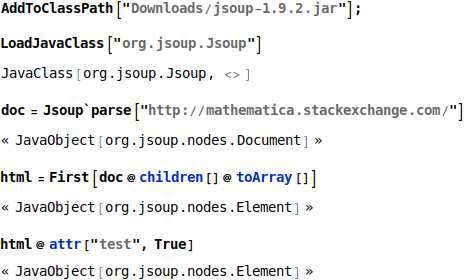 One explanation is the difference in operating systems. While Picket is using OS X, I'm working on Linux here. I tried the above example in Mathematica version 11.

Not the answer you're looking for? Browse other questions tagged java or ask your own question.

8
Automate mouse clicks with Mathematica
4
Passing an internal static class in JLink?
6
How to discover a Java Class Path used by LoadJavaClass?
3
How to stop running Java?
3
How to fix a “Java failed to load class” when using custom Java class using JLink?
3
Failed to load JLink in consecutive antcall's
5
Incorrect number or type of argument when using Jlink to call setAccessible
3
A JAVA Program wants call Mathematica's Reduce function to solve equation and get the result