SyntaxForm not correctly parsed by FrontEnd

When using TagBox with SyntaxForm, I noticed sometimes it is not well parsed by the FrontEnd. Here is a minimal example. First input

Then copy the output f to new input, and do some prefix or postfix operations. There is an error message.

A screenshot is attached. 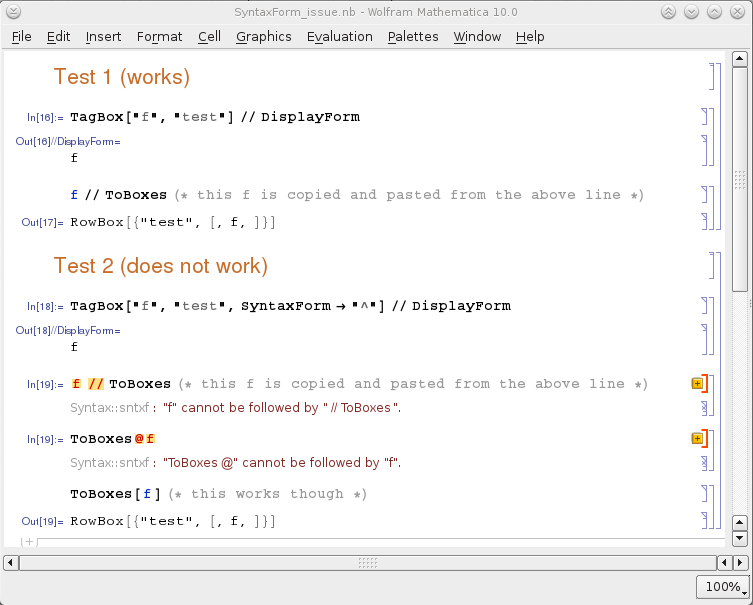 To debug further, one note that where there is a problem, in the saved file the cell is broken into more than one RowBox, for example:

I am using Mathematica 10.0 on Linux x64. I have also tried SyntaxForm->"a^b", or other operators. None of them work well.

Am I doing anything wrong or is it a bug?

As @WReach commented, I should have provided more details about my goal, otherwise why not go without SyntaxForm? And here is what I wanted (still a simplified version of the realistic case): typeset derivative in a good-looking way.

The simplest implementation is

However, if I evaluate

This is not what I want (it evaluates correctly but does not look correct). Instead I want (∂ f)². Note that here I could use RowBox instead of GridBox and then there is no such problem. But I do need GridBox in the realistic case because it is more feature-rich (I could use RowBox[{GridBox[...], ""}] to replace GridBox[...] as a workaround. But I hope there is a cleaner and less hacky way). Also the Notation package is not powerful enough for my actual need so I want to do it myself.

I think the logical move to solve this problem is to use SyntaxForm. Indeed, if I define

I get the desired (∂ f)² appearance for d2[f]^2. However, now the problem that I have described appears. If I evaluate d2[f], and copy the output to new input and use, say, post-fix form of operators, it ends up with an error.

Using a TemplateBox instead of a TagBox should fix your problem.

Not the answer you're looking for? Browse other questions tagged front-end notebooks syntax or ask your own question.

6
CellEvaluationFunction or $PreRead stripping inline cells from text cells
15
How to copy code out of notebook to an external text editor without extra line feeds being added?
6
Output code not highlighted when used as input
6
Close or Open, not OpenClose CellGroups for specific CellStyle
3
visible indication that a cell is not evaluatable
3
Matching symbols in assignments using NotebookImport
7
Mathematica v 12.1.1.0 FrontEnd Autoformatting Bug (?)
3
How to ask FrontEnd to wait until an Evaluation has finished?