How to find the period of an arbitrary mathematical function?

Is there a function to find the period of an arbitrary (possibly complex) function in Mathematica?

You can check out this one. I don't know how well it works

Perhaps you are also interested in the other functions in that context. Check

As @Artes notes in the comments, in v10 there's a documented version of this function called FunctionPeriod

Here is a numeric approximation method that can be useful when no analytic information is known. I will illustrate with the function WeierstrassPPrime[t, {2, 3}] that was mentioned in a comment to one response.

We begin by taking random steps, and sampling the function at those steps (I'll explain the random step size presently). We then plot the coordinates thus obtained, to do a visual check that we have at least a few periods. 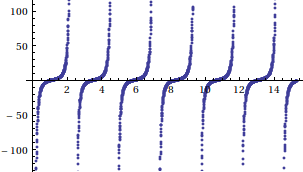 So far so good. We now order these by their y coordinates, and subtract x values that correspond to neighboring y values.

Of course the neighboring y values might not be terribly close. I will use the following heuristic to "order" them in terms of which corresponding x differences I want to use. We take each y difference, and divide by the sqrt of sum of squares of the two y values from which it arises. We regard x differences as being more useful when that ratio is smaller. The idea here is that if the y difference is zero then, for this function (which is monotonic on a period), we are "close" to an integral number of periods apart in corresponding x values.

So we now sort according to the heuristic described above.

Next we discard those x differences that are (approximately) zero periods apart.

From these we can cull the differences that are approximately one (as opposed to more) period apart.

Finally we average these. This gives a fairly good approximation to a period.

I will now mention why we did not take regular spacing: had we done so, we would require at least an order of magnitude more points to get an approximation this good; best we might get from points spaced at intervals of .001 is an approximation to that many places. While I do not claim our averaging approximation to be perfect, I will surmise it is good to at least three or so places.

One might use the differences that are multiple periods apart to get a possibly better estimate via weighted averaging (the idea being that more samples giving a lower variance). I'm just showing a simple computation requiring minimal work to get an average.

There are (at least) two problems with this approach. One is that we used real data, whereas the request was to handle complex periodic functions. It is not too difficult to extend to complex. One might work with real and imaginary parts separately, for example, and either average or use the lesser if one is roughly an integral multiple of the other.

A bigger problem is that we relied on monotonicity within periods in order to assert that coordinates with approximately equal y values had x values that differ by roughly an integer number of periods. Provided there are no flat parts (e.g. from a Haar wavelet), one can often deduce which x differences correspond to period separations by clumping them. The ones that are an integral number of periods apart will tend to be more common than differences that come from close y values where corresponding x pairs were not separated by an integral number of periods. This idea at least works for functions that are, to crude approximation, roughly sinusoidal. I'm sure there are more pathological examples where it will fail. In such cases some plotting and human intervention might be needed in order to figure out which x differences correspond to actual period separations and which come from inadvertent closeness of corresponding y values.

This process can be much harder for experimental data. For an example of such, see this cepheid demonstration or this related pulsar star period demonstration How to handle such a problem is another topic for another day.

Here is an example of how one might deal with nonmonotonicity. I will use a function mentioned in the comments.

Again we will take a large number of samples. Some experimenting indicated what would be a good set. I'll show the plot as well. 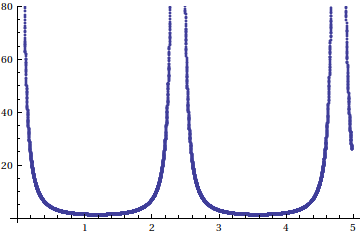 Again we create differences of x coordinates that correspond to neighboring y values. This time I'll be less fussy and use all of them, excluding ones that are quite small

Here is where the clumping happens. We will split this list, grouping pairs that are within .001 of one another. I'll explain why in a moment.

Now we look at the lengths of these groupings. One will stand out as being huge relative to the rest. This is the "main clump" (apologies for use of technical jargon).

We take this clump and average its members. This gives our estimate for the period.

So why does this grouping tactic work? The idea is that for a curve like this, it is roughly a 50-50 proposition whether y neighbors will belong to x neighbors that are roughly a period apart vs. on the flip side of the same period. In the latter case the x distances are spread out over a wide range, whereas the (approximately) period-separated x distances will aggregate near the period. As nearly half fall into that class, we go for that large set. Hence the terminology of "clumping".

The 50-50 above is loose talk. Since y neighbors can come from actual x neighbors, and since we do not have as many full periods as mirrored pairs of half periods, it is more like a bit under one in three that we get full period separation of x values for neighboring y pairs. But so what? We still get our clump. Had we used more periods, tehre would be other clumps of integral period separation, and we could use those as well in the averaging process, of course weighting by the appropriate integer for each.

My earlier post, directing people to a paper, seems to have been relegated to a comment on some other marginally-related post, so I will try to explain in-line enough of why the answer to the question is related to symmetry, and what one might in fact use a computer algebra system to do about it. I suppose it is possible to copy the whole paper into stackexchange, but is that really useful?

Here's an except from the paper..

Consider symmetry as invariance under a group of transformations. Thus, given a transformation $T$ that maps some domain $R$ to itself, we say that $f: ~R\rightarrow R$ is symmetric under $T$ if and only if $f = T[f]$. Analyzing the set of all possible $T$ in full generality is neither practical nor particularly helpful. Instead, let us focus on transformations $T$ that can be expressed in a particular, but still interesting, form. Given $f(x)$, define $T[f](x)$ as a combination of linear transforms around the function $f$ as follows: $$ T_{a, b, c, d}[f](x) = a * f( b * x + c) + d; $$ Such a family of transformations is parameterized by 4 constants. For our current discussion you may assume they are real numbers $\{a,~b,~c,~d\}$, though this could be generalized. The family of transformations is fairly powerful; in particular, it allows us to express the forms previously mentioned plus other traditional notions of symmetry. Thus the notion that a function $f$ is even simply means that it is invariant under $T_{1, -1, 0, 0}$. Similarly, the notion that a function is odd simply means that it is invariant under $T_{-1, -1, 0, 0}$. This family of transformations also allows us to express periodicity, since a function periodic with period $p$ will be invariant under $T_{1, 0, p, 0}$.*

A solution to this problem can be expressed as a call to Reduce in Mathematica, though exactly what Reduce will do depends on the version of Mathematica, past, present, and future. The paper was written in 2004. http://www.cs.berkeley.edu/~fateman/papers/symmetry.pdf

and no, it does not mention Fourier series, which is an alternative but rather unrelated approach to determining periodicity.

I found another method:

But it seems it works only for basic functions.

Not the answer you're looking for? Browse other questions tagged calculus-and-analysis trigonometry or ask your own question.

1
How to find the minimum positive period of a function
23
How do you find the frequency and amplitude from Fourier?
12
Finding the Period of a Limit Cycle
2
Highlighting a single Period of a Trig Plot
6
What's wrong in FunctionPeriod?

6
How to take the derivative w.r.t. an arbitrary function?
1
find the inverse of a hyperbolic function
3
Writting a Hessian for an arbitrary number of variables or for a arbitrary vectorial function
2
How to take derivative of the argument of an interpolating function
1
Gradient of function with arbitrary number of variables
2
Finding the period of a function of an interpolating function
1
Find the maximum of a given function