How to factorise a variable out of an indefinite sum?

(I should start by saying I'm a total beginner with Mathematica, so if the answer needs code I'll need it spelled out quite clearly, the learning curve for this is proving steep!)

Basically what I am trying to so is manipulate a power series for an expression involving the function alpha(r) inside an indefinite sum, so that I can pick out coefficients from it (series solving an ODE, for context). The following code is used to produce alpha and then the sum of squares of its first derivative.

With that code, the sum splits up into a series of sums, each only one term long:

However, the variable r is still inside the sum in each case, meaning that when I apply Coefficient[,r,2] (etc) to the output, it just spits out all of the output (i.e. doesn't do anything) rather than just identifying the terms of the correct power of r. What I really need is some code that pulls the 'r' factor out of each summation term, so that Coefficient will pick out the required terms.

Here's my approach using replacement rule /. Sum[r^p_. a__, b_] :> r^p Sum[Times[a], b]. I have a hunch that there's a built in function that could accomplish this but I can't seem to find it. I've also made some modifications to your code:

1) Changing the first function to β to avoid clashing with the subscripted symbol α.

2) Changing the upper limit of the sum in η from N to n, since N is a system function.

3) Streamlining the η function using @Artes answer in the linked Q&A in the question's comment. 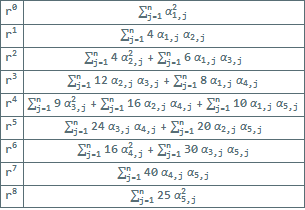 Not the answer you're looking for? Browse other questions tagged algebraic-manipulation summation factorization or ask your own question.

2
Multiply out product of sums
4
How to collect terms with z-derivative?
0
Plotting a Double Sum
1
Code for specific sum
5
Construct approximation by eliminating algebraic terms of small magnitude
3
Removing fractions without a particular variable
0
Finding ODE series solution coefficients
1
cancel out the common terms and factor out the common terms and extract the coefficients