How to setup Team Development for a Mathematica project?

I am currently working solo on a project that consists of package files, munit tests, notebooks and .xls files. I use Wolfram Workbench as an IDE. I want to collaborate with others on this project. Ideally I would like to do this as I am used to do with Java: dump everything in cvs ( any system will do ) on the net and then check/out, check/in with one person as a repository admin.

Question: How should I do this with a Mathematica project? Do I need Workbench plugins? What are the particular pitfalls, if any?

This is how I got my setup :

The Wolfram plugin will give you all the features of the Workbench : code editor, documentation builder, webMathematica, MUnit package as you can see from the screenshot below . 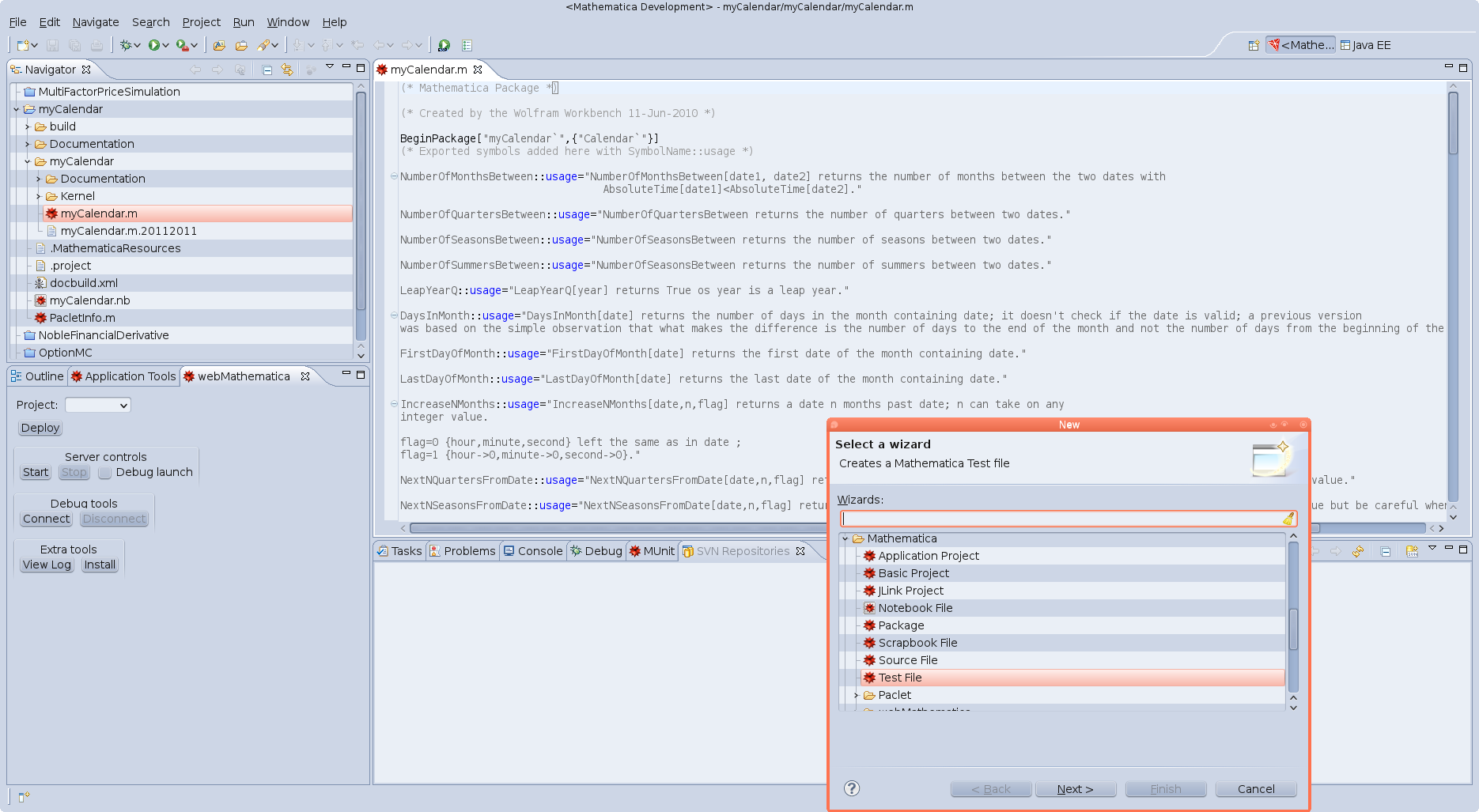 Here is a take for those using only the Mathematica front end and git. I recently starting using git so that I can work with other collaborators. It was relatively simple since we were using notebooks to create figures from imported data that was located in the same directory. In this case all the notebooks started with the line:

The problem happened when we needed to use other packages. I did not want to bother them with getting their own copy and to put it in $UserBaseDirectory. I figured instead that I can create a folder in the git project were I could place all of the external packages that we need and use them. Now we just need to tell Mathematica where to look for those files. Initially my collaborator used the absolute path: /Users/username/path/to/gitproject/mathematica/. This path was obviously not going to work for me. The way to do this is to declare a relative path. Since we are working in git we can use

to obtain the path to the git project. Now we can create relative paths. So now our Notebooks started with this:

This however was getting annoying since we had to copy and paste this code every time we created a new notebook. Instead I came up with this function and put in the file $UserBaseDirectory/Kernel/init.m.

Now I only bother my collaborators to put that file so that every time they start Mathematica they have access to the function GitSetup. Now every notebook starts with

And in case they forget what this function does:

Now we can add or develop packages related only to the project we are working on without having to worry about any paths and without even having to call SetDirectory.

If your git project contains source files from other languages it might be convenient to create a .bashrc in the root git folder. This bash file should apply to all the collaborators of the group and not just yourself (you have ~/.bashrc or ~/.bash_profile for that). This is how the .bashrc file looks in the git directory (placed in the same folder as .gitignore and .gitattributes):

Whenever we want to work in the project we source that file and all the packages in the project will be available. In this way we can specify where we want Mathematica to look for packages in the git project by creating an enviroment variable. I called it MMA_PATH and added two paths to it. Now the $UserBaseDirectory/Kernel/init.m file looks as follows:

Now the notebooks start with GitSetup[] and we are ready to work.

If it so happens that some of your collaborators refuse to use git and prefer to use something say like dropbox, then the notebooks you produce with the command GitSetup[] will also work for them.

Since your repository already contains a .bashrc file all the notebooks in your repository will also work for your non-git collaborator because the GitSetup function will look for such file the momement it realizes that the user does not have git.

Edit: For those who have been following the edits to the init.m file, I have included the GitSetup function inside a package so that the names in the Global context does not get polluted when you start Mathematica.

If you're already using Workbench, I don't see any reason to switch to Eclipse+plug-in. CVS is included in Workbench, and you can still add additional plug-ins as needed.

Likewise, if you're already using Eclipse for non-Mathematica work, I'd just install the Workbench plugin.

As far as I'm concerned, the main difference is the icon. (There are of course other differences, but mostly they don't affect my use of Workbench.)

Not the answer you're looking for? Browse other questions tagged development or ask your own question.

584
Where can I find examples of good Mathematica programming practice?
101
What are the recommended settings for git when using with Mathematica projects?
13
How to share a notebook?
8
Working in a team in Workbench