Unexpected behavior when using SortBy as a dataset filter

I am still experimenting with datasets. Recently I tried to query the Titanic example to get info on the oldest passengers. Here is what I tried 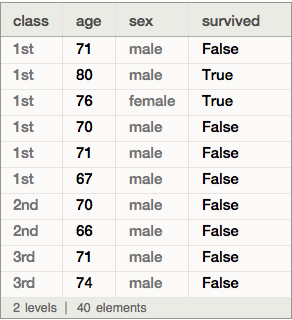 That's fine, but I really wanted the data sorted by age. The documentation for datasets mentions that SortBy can be used as filtering operator, but gives no further details on it use that I could find. So I was left to experiment on my own. Here is my second attempt. 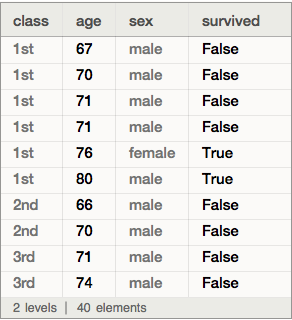 I did find a work-around but it's weird. 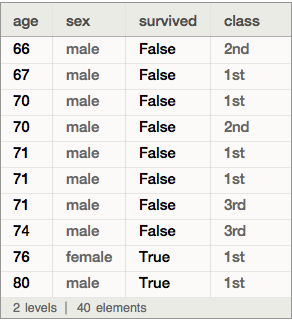 Note that the argument to SortBy is complete nonsense, but this last code works as I want. Can anyone explain this result?

One last question. Since there is essentially no useful documentation on using SortBy in the way I have above, it's hard to dispute any behavior it shows. Nevertheless, I ask if you think I should report the behavior I have observed to Wolfram tech support as a possible bug?

I do not believe that this behaviour is a bug. The correct usage would be SortBy[#age&] or SortBy[Key@"age"]. The rest of this response will explain these assertions.

The crucial point is that the "age" argument in SortBy["age"] is not conferred with any special meaning on account of SortBy being used as a Dataset operator.

In the absence of such special treatment, SortBy["age"] gives us the same result as if we used it as a normal function outside of a query. That is, the result is the same as if we say SortBy[Identity] or simply Sort. This point will be elaborated upon later in this response. But for now let us take up why SortBy arguments receive no special treatment in a dataset query.

One might reasonably expect that since titanic[All, "age"] returns the age values from all of the associations, then by extension titanic[SortBy["age"]] should sort by them. Unfortunately, this is not so. To understand why, we must delve into what exactly constitutes a Dataset operator.

The Dataset documentation tells us:

In turn, the Query documentation describes a domain specific language or DSL that defines query operators for hierarchical data. This is somewhat like the Graphics DSL for graphical operations. {Red, Circle[]} is just an inert list as a free-standing expression, but it has special meaning inside a Graphics form.

So it is with Query operators: "age" is just a string by itself, but the documentation tells it takes the role of a key selector descending operator within a Query. Indeed, all of the descending operators have special treatment in the query context.

Note carefully the use of op1 and op2 in the descriptions, and well as the explicit statement that they refer to operators.

In contrast, the description of SortBy makes no mention of operators:

Thus, a close reading tells us that SortBy parameters are not operators. This is true for all ascending operators that do not appear in the "subquery" list above.

One might accept that this is documented behaviour, but then wonder why SortBy, Merge, Counts and all the other ascending operators do not accept operator arguments?

Allowing operators in arbitrary ascending operators would cause confusion. Observe that any expression that is not explicitly designated as a descending operator is by definition an ascending operator. This includes all user-defined functions. How can the query evaluator decide whether to treat any given argument as an operator? Which arguments to Histogram should be operators? What about the arguments of a user-supplied function? It is difficult to tell without contextual knowledge. This would mean either long lists of exceptions, or some elaborate syntax to designate exceptions. In my opinion, WRI chose wisely to go with the exhibited simple rules.

Earlier, it was stated that SortBy["age"] is the same as SortBy[Identity]:

Why? SortBy["age"] specifies that the list is to be sorted by the result of applying "age" to each associations, as if we were sorting like this:

Since the head "age" is inert, it is simply wrapped around each association. This wrapper does not change the lexicographic order of the list elements. So the result ends up being sorted first by class and then by age since that is the order that the keys appear in the association.

If the keys were reversed, then the age sort would appear to work... but only by blind luck!

If we wish to reliably sort by age, then we need to use one of the following forms:

These both correctly extract the age key from each assocation.

But It Could Have Worked...

Having said all that, I will note in closing that if WRI had added an up-value to Association along the lines of...

... then we would not be having this discussion. The original example would have worked, and all without having to introduce any exceptional cases into the Query DSL.

You have to use a pure function also for SortBy 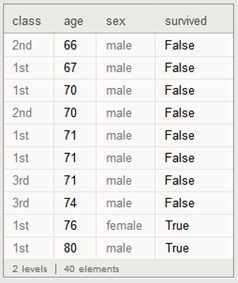 Since #age will pick out the values of the key "age" in the association.

Not the answer you're looking for? Browse other questions tagged sorting dataset or ask your own question.