How can I save a Manipulate's control settings to a dataset?

This is probably an extremely simple question. I have a manipulate that sets variables used to define an offset, amplitude, frequency and phase of a trigonometric function.

I would like to use the Manipulate as an editor that sets the values of the variables in the code snippet above and then passes them on as parameters to a function along with other sets of variables.

Is there a way to add a button to save the current values to a dataset?

I think I have it this time:

Here's the Manipulate, I removed the Module and cleaned up the Symbols a bit 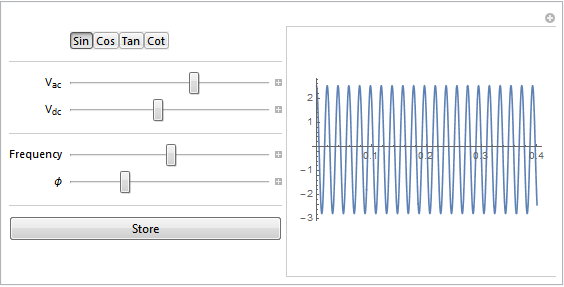 A Button has been added that, when pressed, creates a Dataset, d, that can be referenced outside of the Manipulate.

The following solution may or may not be too complicated to deal with, but it's kind of neat. It uses DynamicModule wormholes to link variables between two DynamicModules. One of the modules has to be created from within a live instance of the other one. That is to say, you instantiate one (the parent) in the Front End, and it has to create the other (the child). If the child is a Manipulate you have to use both options, InheritScope -> True and LocalizeVariables -> False. You then need to declare all the variables you want to use in the Manipulate into the parent DynamicModule or else they will be Global` variables.

In this setup, I have made the OP's Manipulate the child. Whenever the variables are changed in the Manipulate, the parent DynamicModule has access to their values. You can do with them as you please, including creating a Dataset if desired. Just as a proof of concept, I have a button whose label dynamically shows the values of the variables in the Manipulate. If the button is pressed, the global function f is called. It does nothing if f is undefined, but it's there just to give the idea. If you uncomment Print@, pressing the button will print the function call (which is shown below the image). 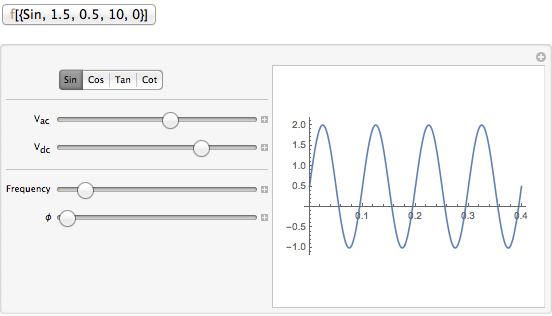 Here's an f that yields a Dataset:

Having the Manipulate cell automatically created by Initialization may prove troublesome, which I hinted at rather obscurely above. One variation would be to put the code in a button that would print the Manipulate in a cell whenever button was pushed. In the OP's application, another variation that might be convenient would be to have an edit button that creates the Manipulate in a new dialog/palette. All these approaches might allow the user to create multiple copies, which is probably not particularly desirable. One can put in code to block the check whether a Manipulate is already displayed. The following is one way to create palette. Make the changes indicated in the following:

Not the answer you're looking for? Browse other questions tagged manipulate dataset or ask your own question.

548
Where can I find examples of good Mathematica programming practice?
18
How to extract the numerical value of a dynamical variable

0
How to force Manipulate to use preserve control settings over successive evaluations
3
How to mimic CheckboxBar's Method->“Active” option in a Manipulate's checkbox control?
1
How can we combine two column of same dataset?
1
Keep settings of controls in an inner scope when changing control in an outer scope
11
How to get control of Dataset display?
5
How can I add column titles into a Dataset?