Why do quote marks appear in output when saved with Save Selection As?

Update #2: This behavior has been confirm across platforms and in multiple versions. Therefore:

Update: As Simon Woods astutely observed this problem only occurs when you select the cell contents rather than the entire cell via the bracket. Those two tested this and reported, please check again selecting only the contents and see if the behavior appears.

In version 10 quote marks (i.e. ShowStringCharacters) appear in output when it is saved as an image using Save Selection As...:

Appearance in the Notebook:

When saved as a PNG:

These quote marks do not appear in export from version 7, at least as I had it configured.

Why do they appear?

Can I keep them from appearing?

The quotes appear because the InputForm does not show them, while the OutputForm does.

Programmatically, you can explicitly call OutputForm to avoid this:

You can also go into Format > Option inspector… and look for ShowStringCharacters and using Save selection as…:

My opinion is that it is not a bug. Different selections yield different inputs, so different outputs are at least possible. On the other hand, I'm not sure I would call it a feature. It strikes me that users will wonder why they cannot easily get an image of what they see.

"Save Selection As..." seems to consistently show the results of NotebookRead[]. There are (at least) three forms of output from NotebookRead[], a box expression, a complete Cell or a list of cells, or a String. Each type is packaged into a Notebook that is then exported.

Note that a box expression is put in a cell with no style. A complete Cell is passed as is. And note that a String, such as 123, is automatically formatted as "Text". 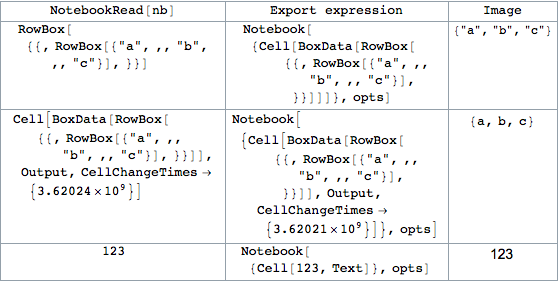 In this regard, @Carlo has it right, that when only the contents are selected, we lose the information that the style is "Output".

It is not clear to me why, assuming it is intentional, saving a selection from the contents of the cell does not automatically inherit the cell style of the enclosing cell in the notebook expression that is exported. There could be issues if the selection was inside a inline cell I suppose. For instance sometimes Mathematca interprets actions, such as when an input or output cell is pasted inside an input cell. The expression is pasted, not the cell, whereas pasting a text cell in an input cell yields an inline cell.

I don't have a general solution. One might add something to KeyEventTranslations.tr or to MenuSetup.tr to select the cell. If nb is the notebook with the selection to be saved, the following

Other programmatic approaches seem possible, such as styling the selection with the cell's style. I could not discover a way so that the menu command would do this.

what one shall expect:

at least on the Monitor ... Standing above can be applied accordingly for "Save Selection As"

Not the answer you're looking for? Browse other questions tagged front-end export output-formatting image or ask your own question.

30
Save as pdf broken in version 10.0.2?
3
Alignement of text
2
A strange comportment after changing fonts for the output

20
How to make a parallel auto-generated .m package from Initialization cells?
7
How to suppress undesirable kerning rules in math inline cells?
5
How can selection of delimiter matches be disabled?
65
How to disable the small pop-up windows when mouse is over a Mathematica command in V10?
13
Bug in handling backslashed Cyrillic symbols in v.10.0.0?
3
Can I save a manually cropped Image in Mathematica 10 without hard cropping?
17
Evaluate selection in new window or new notebook?