i'm trying to get familiar with the new Dataset-stuff in Mathematica 10. As it will (hopefully) provide some benefit for me, I have started to convert my app to move from list and list of rules to Associations and Datasets.

Starting point for me is an XML object, which is converted to a Dataset now. I was hoping to reduce the programming code by e.g. applying functions to multiple columns at once.

This is an example Dataset: 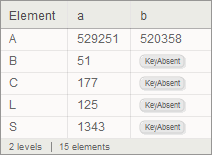 As the XML sometimes contains integers and reals in scientific form, I'm using

to convert the stuff:

The issue: there is some kind of rounding in the resulting recordset:

If I apply my function directly to my list or association, everything is fine:

I know that Internal`StringToDouble is an internal function, but I found several posts in this forum using it, and I really like it!

Is there an issue with M10, Dataset and Internal`StringToDouble?

Are there any other robust string coversion functions availabe which can handle integers, reals and reals in scientific form inside a dataset? Thanks!

I don't yet know where the rounding is coming from but it appears to be occurring during formatting.

Actually the rounding seems to be a standard part of the formatting of Dataset:

Not the answer you're looking for? Browse other questions tagged string-manipulation dataset or ask your own question.

10
Does Dataset round?
13
Menu commands on Palettes and other windows without menu bars?
3
Faster way to convert real strings into numbers
10
Is “MaxMessageCount” broken or is its function counter-intuitive?