I've upgraded my home installation of Mathematica from version 9 to 10 today on a Windows 8.1 machine, and I'm getting a weird font issue - the fonts are not anti-aliased, and look unbalanced and weird. Just look:

For comparison, here what it looks on Linux with Mathematica V10

At this point you may object, as these issues are too minor to get worked up about. But neither I nor my otherwise benign OCD can work like this. Any ideas?

EDIT I've just had an idea, that maybe I need to manually remove old fonts leftover from the old Mathematica 9 installation. I've read somewhere that they were not going to pollute the main font catalog with symbol fonts in the next release, and maybe the new Mathematica is using old fonts for some reason. I can't test it right now myself, unfortunately.

This problem is probably due to the MathematicaMono font which is introduced in v10.

Defining the problem:
Some fonts ("[","_","]","=", etc.) are rendered badly with strange thinning in v10 in some notebook magnifications. This is obvious when you compare the renderings from v10 with those from v9. 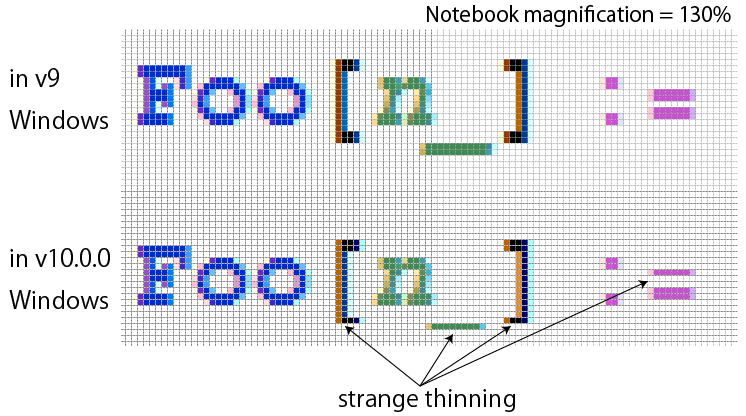 After the substitution, the notebook was rendered as in v9 at least for characters like "_" and "=":

Sadly, "[" and "]" were not fixed because Mathematica1Mono font lacks glyph for these characters. But anyway, the substitution experiment partially confirmed my hypothesis.

What's wrong in MathematicaMono font?:
I have no answer yet. So I can not provide the complete solution. But I found a strange thing in MathematicaMono font. In all of the newly introduced MathematicaXXX.ttf fonts in v10, "Win Ascent" and "Win Descent" properties for OpenType fonts are in strangely big values (5000 and 3500) compared with the values in v9 Mathematica fonts (1747 and 479). This makes the previews of MathematicaXXX fonts small in a strange way when you open the fonts in Windows font viewer program. But, I could not fixed the original problem even when I edited "Win Ascent" and "Win Descent" values of MathematicaMono-Bold font in FontForge.

I hope my answer helps someone to solve this problem.

The rendering problems reported in Mathematica were completely reproduced in MS Word! This indicates that the problem is not in the Mathematica Front-end but in the font itself.

I analyzed which fonts are loaded when starting Mma v10 compared to v9. The problem could be tracked down to the loading of the fonts in the Folder

If you open Mathematica-Bold.ttf or MathematicaMono-Bold.ttf, you will see how ugly these are.

To prevent loading these fonts one should make a backup copy of this TrueType folder and than delete all .ttf files that are in it. A simple renaming of the folder increased the Mma startup time and is therefore not a good idea.

As a follow-up to Tetsuo Ichii's answer, the thinnings observed in version 10 are also present in 11.0.1:

Not the answer you're looking for? Browse other questions tagged front-end bugs fonts rendering antialiasing or ask your own question.

0
Blank sequences do not display anymore as continuous lines