Try this code in Mathematica 10:

I got a nicely formatted table:

But when I do the same thing for 5 columns, it won't get formatted at all:

Is that what supposed to be? Don't you think 4 column is a pretty stingy limitation?

The behavior you are seeing is actually because the type deduction that Dataset is doing behind the scenes isn't perfect (and indeed in some sense cannot be perfect). Your synthetic example is such that your second list of associations is "most consistent" with a particular type that doesn't typeset as a table.

You can see what type Dataset deduced in a given case by using Dataset`GetType. First get TypeSystem onto your context path, so that the types aren't fully qualified and are easier to read:

Notice that the type of your data has been deduced to be a Vector (homogenous list) of Structss (heterogenous associations), or in other words a row-oriented table.

Here, your data has been deduced as a Vector of Assocs (homogenous associations). Assocs are a type that doesn't care what keys are present, just that they all have the same type, and also that the values have the same type.

That happened because according to the internal heuristics, an Assoc is considered to be a more parsimonious type as soon as we cross the threshold of 4 fields. But this would not be true if we looked at an association whose values were different types, instead of all being integers:

The only consistent type here is a Vector of Structs (notice I'm using DeduceType directly, which is what Dataset uses upon construction). And indeed, this more complex Dataset typesets as a table, owing to the inner Struct type: 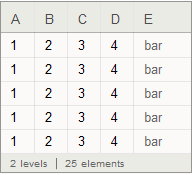 Although it isn't documented and is therefore of course subject to change, you can force a specific type to be used by supplying a second argument to Dataset:

This will typeset as a table, as you desire: 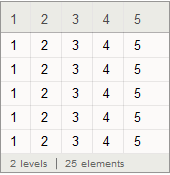 If you look at InputForms of produced Datasets you will see significant difference:

Let us try to reproduce the first structure with 5 columns: 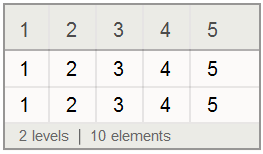 Voilà! I have checked this method with 200 columns and it works!

I think that ideally there would be a separate function for displaying a dataset in the preferred way. Automatic formatting should only produce a summary, i.e. truncate the data if it is too large. But we should have the option to display the complete dataset and tweak the way it is displayed, if necessary.

This is an attempt at writing a function that will take a dataset having the form of a 2D table and will try to format it in a reasonable way. It doesn't aim to be general and will probably fail on more complicated datasets. The way I'm trying to determine the type (schema) is probably clumsy, and I'll take any suggestions on how to do this better (I'm sure there are undocumented functions to do this properly).

This is extended from something for my own use, hence the small font size and the RotateLabel option. People might want to tweak at least the font size when using this.

Here is a cheap and dirty function that takes a Vector of Associations variant of a Dataset and converts it into a Vector of Structs. No guarantees this actually works on a variety of Datasets, but it worked for me. If the keys in each element of the Dataset are not the same, this function will not work properly.

It would seem that the 4 column limit only applies to datasets that contain only numbers as values. For example:

However, making all the values for 1 set of keys into strings: 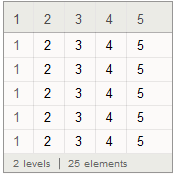 Changing 1 column to strings works for my particular application.

One question though remains: When would it be preferable to show a list of associations when each row contains exactly the same keys? I cannot think of a case where I would want that behavior.

Not the answer you're looking for? Browse other questions tagged version-10 dataset or ask your own question.

2
Why does my dataset lose its typesetting when I add columns?
36
Show More Rows of Dataset
16
Can't get Append to append a record (association) to a dataset
13
How to get control of Dataset display?
16
Listable functions thread over Associations; is this documented?
6
How to correctly show plots in Dataset?
1
How to show complete dataset?

16
Dataset with more than 16 "columns"?
7
Writing code which generates a function to append many columns to a dataset
21
Assign names to Dataset columns
2
Plotting using a Dataset, setting the color based on one column and plot markers based off another column
6
Displaying more columns of a dataset
4
Apply TimeSeries onto one or more Dataset Columns
5
Data munging Mathematica Dataset object