How get eigenvectors without phase jump?

For comparison, we take the analytical solution of the eigenvectors for this 2 by 2 matrix

we see the curves are smooth.

So why there are these phase jumps in the results from Eigenvectors, and how to get the eigenvectors without the jumps? (For large matrix analytical solution is not practical.)

The phase (and length) of the eigenvectors is completely undetermined unless you specify extra conditions in addition to the eigenvalue equation. Given that you don't have any additional conditions, it's not surprising that there is no well-defined way to plot the real and imaginary parts of each eigenvector component.

A simple condition that makes the answer unique is to require that the first component of each eigenvector be real. Also, we can add the requirement of normalization.

Then the procedure would be as follows: 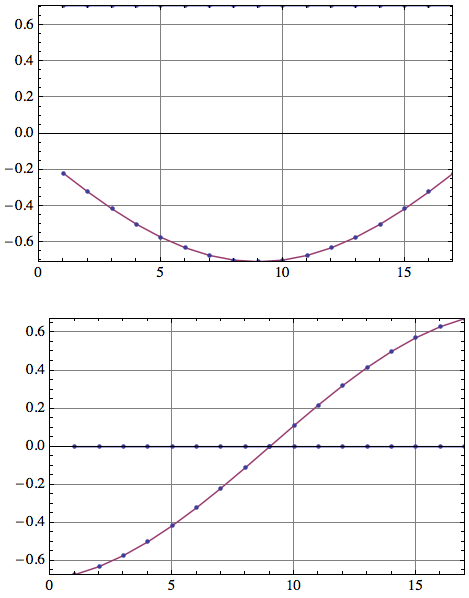 The blue lines (for the first component) show that the real part is constant due to normalization, and the imaginary part is zero at all times. There are no longer any phase jumps because the phase has been fixed.

You can come up with an arbitrary number of alternative conditions that would result in different plots.

For a two-dimensional vector space over the complex numbers (as in the question), we have $N=2$ and hence we need just two real numbers to identify an eigenvector. It is often convenient to represent such two-dimensional eigenvectors as points on a Bloch sphere. This works because the most general form of a vector satisfying the above constraints is

with $0\le \phi<2\pi$ and $0\le\theta<\pi$, corresponding to the azimuthal and polar angle of a spherical coordinate system. These angles are the two real parameters I mentioned.

To visualize the list of eigenvectors, we can then trace the motion of the corresponding point on the Bloch sphere, instead of making plots of the eigenvector components as I did earlier. Here is a function that does this visualization:

Apply it to a modified version of the eigenvector list from earlier:

Here, I deliberately omitted any phase choice and normalization from the test vectors in eigenVects, because blochSphere is meant to do this automatically. It would for example depict the vectors {1,0} and {I, 0} in exactly the same way because of my requirement that the first component should be real. The vector {10,0} would also look the same because it only differs in its norm.

Not the answer you're looking for? Browse other questions tagged matrix linear-algebra or ask your own question.

2
How to make Eigensystem in version 10 produce the same results as version 9
0
Signage of eigenvector
14
Pulsed NMR animation
12
Sorting eigenvectors according to its projection
8
How to align 3 plots horizontally without spacing?
5
Plotting eigenvalues smoothly
2
Why do the eigenvectors for two similar matrixes differ by a large amount
3
Plot and an error
2
Draw Vectors in Spherical Shell and Then Animate
4
Sorting Data by Differences between Columns
See more linked questions