It is easy to make this, if the document only contains output cells. For instance, this

makes a button which opens the window with the result x^2+2xy+y^2.

It is easy to make a notebook with a cell that can be later evaluated:

but it also returns the already evaluated result. For whatever reason this:

One can also show the both unevaluated input and the output like this:

However, I would like to get rid of the operator Unevaluated in the first cell.

My aim is to get a separate notebook that is generated from the initial document. This notebook should have an input and the corresponding output cell (or cells), which a) shows how some result has been achieved in the past and what was this result and b) in which I could try to change something in the input cell(s) and see what would happen, while the source code lays somewhere unchanged. Thank you, Alexei

evaluation notebooks formatting
Share
Improve this question
edited May 3 '12 at 11:17

With minor modification of your code, you can use

EDIT: I would go with Heike's s solution. But the following maybe of pedagocial value: ClearAll[func] preceeding definitions of functions that you edit/re-edit until you find a working version is a good practice. Forgetting this is the reason for the convoluted workaround in my original answer. So, the following works as OP intended:

Not sure if this is what you had in mind, but maybe you could do something like this

Pressing the Show Expression button will create a popup notebook with the input form of the expression plus an Evaluate button. Every time you press this button the first input cell plus the corresponding output will be copied at the bottom of the notebook. This will allow you to keep track of the changes made to the original expression. 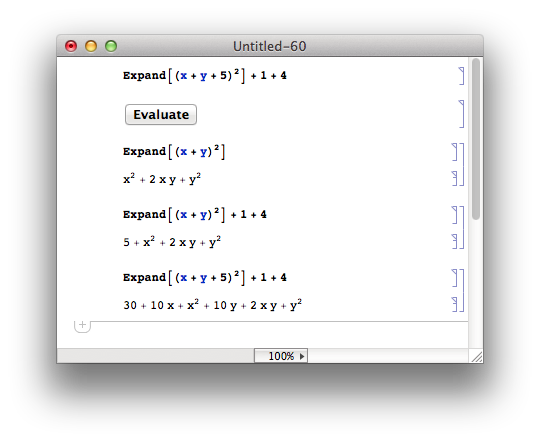 Not the answer you're looking for? Browse other questions tagged evaluation notebooks formatting or ask your own question.

39
How to Keep Input Cells Hidden After Evaluating Notebook
1
Output cell written with NotebookWrite dissappears on whole notebook evaluation, yet remains if I individually evaluate it
4
How can I add drop shadows to the text of non-input/output cells?
7
Saving notebook, excluding output cells, without losing "working notebook" output cells
1
Automatically evaluate next cell
8
How to close all tagged input cells without closing their output cells?
2
How to select Input|Output Cell Groups in the Notebook?