but it seems to be quite slow, is there any way to make it faster?

Well, you can use the undocumented RegionDistance which does exactly this as follows: (This answer, as written, only works for V9 as noted by Oska, for V10 see update below)

here is a triangle in 3D 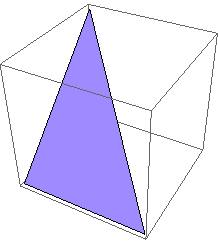 Now suppose you want to find the shortest distance from the point {1, 1, 1} in 3D to this triangle just do the following:

As a bonus, you can get the exact point on the triangle that is closest to the given point as follows: 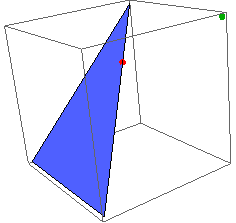 The above undocumented functions used in this answer now works out of the box in V10 so no need to load the Region context as I did above. Otherwise everything works as is. Also, now you can use the new Triangle function in place of Polygon above.

Not the answer you're looking for? Browse other questions tagged performance-tuning computational-geometry geometric-computation or ask your own question.

3
Distance from point to line
23
Distance between point and line segments
37
Any ideas on how to use the Region` context?
1
Define a 3D surface for input in Region function