I'm trying to numerically integrate a function which has a vector-valued slow part and a much faster component which is shared by all the components, i.e. an integral of the form $$ \int_a^b\begin{pmatrix}f(x)\\ g(x) \\ h(x)\end{pmatrix}w(x)\,\text dx. $$ Because NIntegrate is nicely Listable on its first argument, I can feed it a list-valued argument without a problem. However, it appears to be doing each component as a completely separate integral, which results in a lot of work being re-calculated.

For example, the (simplified) example integral 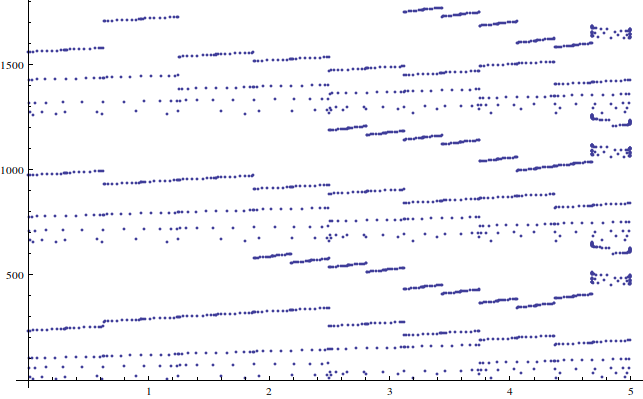 It is clear that the kernel is doing the initial sampling, and then the further refinements, separately for each component. While the required sample points are not identical, there is a lot of shared work and I feel there is a fair bit of room for optimization there.

I am aware that, since the sampling requirements of each component are slightly different, binding them completely will require more evaluations in some components than would be necessary. (For instance, in the example above, the extra detail required by the first component around $2\leq x\leq 3$ would be slowed down slightly if it was required to also calculate the second and third components there, though they do not require it.) However, the components in my case are similar enough that I do not think this would be an issue.

One idea is to integrate once to get the sample points then compute the remaining integrals as sums:

Note the accuracy is not terribly good, NIntegrate gives:

Somethings a bit off in my quick&dirty trapezoid integration but i think this can be made to work.

For this example there really is little benefit to NIntegrate's adaptive sampling so we might as well just use a uniform sampling:

are "yes" and "yes" as demonstrated and discussed in this post to "How to calculate the numerical integral more efficiently?".

Not the answer you're looking for? Browse other questions tagged numerical-integration or ask your own question.

13
How to calculate the numerical integral more efficiently?
1
NIntegrate or NExpectation a vector function
1
NIntegrate fails to converge around a value out of integration range