I know there is a xml file with language for Mathematica notebook (nb or m files). The link is http://sourceforge.net/apps/mediawiki/notepad-plus/?title=User_Defined_Language_Files

Now I want a xml file to format not the code of nb file but what the user see when he opens the nb file in mathematica.

Any idea before I customize this language???

Just to clarify: you are referring to Notepad++'s User Defined Language as to “xml file”, and your question is whether one can edit the contents of Mathematica notebook visible on screen with tools for editing notebooks themselves (tools like Notepad++ with user defined language).

Yes, it is possible. Actually, it is an important feature of Mathematica's language: what you see in notebook is the same material notebooks themselves are built with.

This is notebook itself (what you don't see on screen) edited in Notepad++: 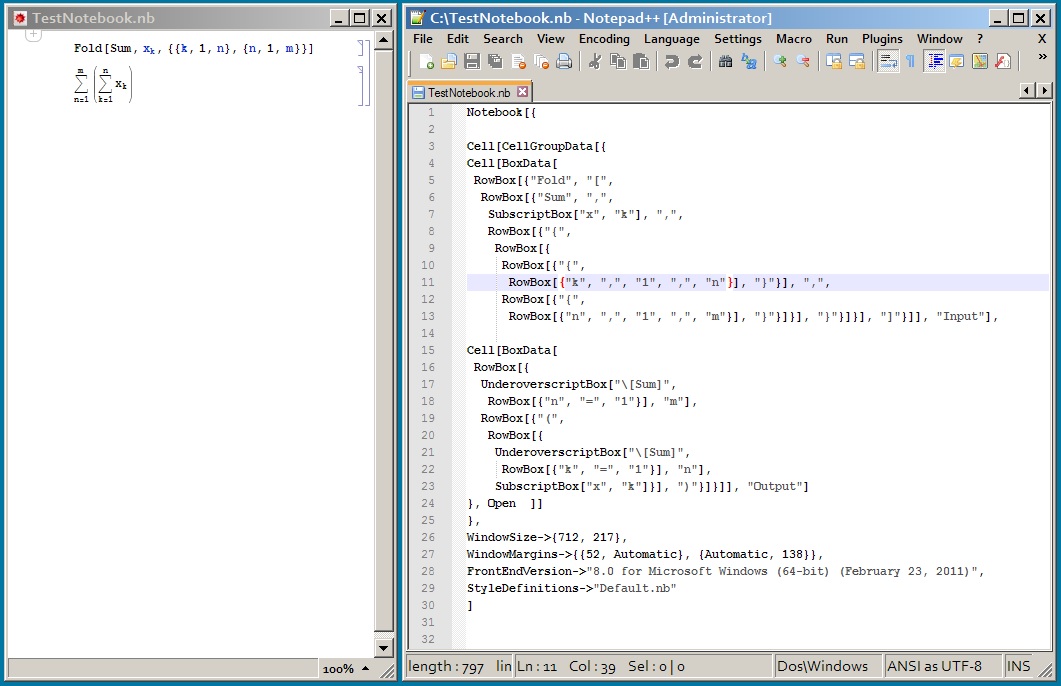 (You may view the image above in a separate tab to enlarge it in case it's shrinked too much.)

Below is an expression from the notebook (what you see on screen) edited in Notepad++:

NB: Notice, however a small drawback: “n” is printed black in Notepad++, as if it was a standard function. It's actually N that is standard fucntion but Notepad++ does not distinguish upper and lower case (or it does but I failed to find how it's done).

119
File-backed lists/variables for handling large data
1
Renaming files of form FileName(i).csv to NewNamej(k).csv where j increments and k resets to 1 when there is a jump in i?
4
Doubts on scripting: error messages when trying to run and how to process lots of files
5
What is the correct way to provide Mathematica with a path to Python user scripts?
52
Argument completions for user-defined functions
5
how to make SaveAs saves to NotebookDirectory[] instead of NotebookBrowseDirectory[]?
1
How to create file names using parameters defined in my code
0
Mathematica sometimes failing to write to file
2
Reading information from a Portable Executable (.exe)