Why is this semicolon in red?

I have a piece of code that works well, but when I put a semicolon after a plotting statement, the semicolon appears in red. What's the error?

warning-messages syntax-highlighting
Share
Improve this question
edited May 1 '14 at 15:32

It's not a syntax mistake. Consider it a suggestion, FrontEnd tells you: "maybe you want to plot it as it has no much sense now".

Of course it may have sense, it's just a suggestion.

If you take a closer look you will find that storing such Plot makes more sense for FE:

A bit of historic background

Before Mathematica version 6 graphics were produced as a side-effect much as Print works now. In fact you can load this old system using:

Now you get this behavior: 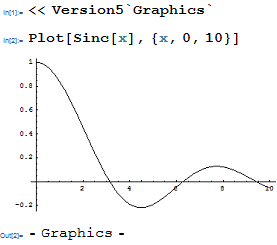 Note that the output is - Graphics - and the plot itself is handled like Print. Since there was often little value in having - Graphics - output it was common to see plot statements terminated with a semicolon, which returns Null which is not written to the Notebook.

In version 6 syntax highlighting of that trailing semicolon was added to remind people that with it no output at all would be produced, since the Graphics object is no longer printed as a side-effect.

Not the answer you're looking for? Browse other questions tagged warning-messages syntax-highlighting or ask your own question.

488
What are the most common pitfalls awaiting new users?
18
Is there a guideline about when to end expressions with semicolons?
0
The problem of For+RegionPlot
1
Input editor does not like my Thread over Circle expression
0
Having problems with ListPlot and a PaddedForm wrapper
0
How to use “For” or other tool to plot points in a gragh?

30
How do I identify the source of a “Tag times protected” error?
4
Plot has red 'film', no error message
6
How to add a custom syntax error check
1
How do I implement this feature in Manipulate?
2
Why is this function indeterminate?
0
Why do I get a Partition::pdep error?
1
Why does this integral not compute?