Function with a sharp resonance which Mathematica fails to integrate. Why?

I'm a new user of Mathematica and I'm trying to use it to calculate the collisional cross-section as a function of energy for a given potential and decay rate. I know that the resulting function should be continuous, but when Mathematica does the integration and plots the function, it gives a discontinuous function. Please help! Here is my code:

The typical probability function for a given energy looks like this: 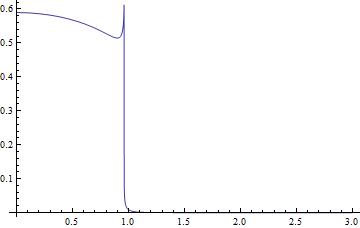 Notice that there is a spike somewhere near b=1, where the probability jumps up to 1. However, we know that this function is continuous because the probability for the decay of an orbiting resonance is 1, and the probability will continuously approach 1 for energies both slightly above and slightly below the resonance. Mathematically, the exponent -2i2[k,b] just goes to -Infinity and so 1-E^(-2i2[k,b]) goes to 1.

Since all of these functions are continuous in this way, the function pb2[k,b] should also be continuous, having a value of 0 for b=0 (since b approaches 0 and p2[k,b] approaches something between 0 and 1), so we should be able to integrate pb2[k,b] with respect to b numerically without any issues, thus obtaining s2[k] but when I tried to compute s2[k] for various k's and plot the results, this is what I got: 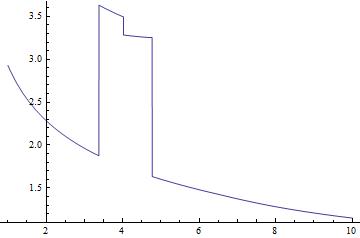 Now everything we know about the mathematics and the physics of the situation suggests that the cross-section should be a continuous function of the energy, so what gives? Why did Mathematica integrate a function which is clearly continuous in both of its variables and give me a /dis/continuous function?

I think it must have something to do with that last numerical integration, because I was given the following error message:

Like I said, I'm a beginner and don't know how to deal with this stuff. What should I do to get the nice continuous s2[k] that I want?

Browse other questions tagged plotting equation-solving numerical-integration or ask your own question.