Define function that goes from one point to another parametrically

I have two points p1 and p2, and I want to get the parametric equation of a linear function that passes through those, but ranging from one point to another.

The goal of having a parametric equation is to have the function defined even when the slope is $\infty$.

I tried this (here the angle[] function is Atan2, is basically ArcTan but ranging from 0-2π):

But when a point is on top of the other the function is a vertical line, ranging from $-\infty$ to $\infty$; I would only want the function to be defined from Last@p1 to Last@p2.

In other words, I want a Graphics' Line, but using parametric equations. 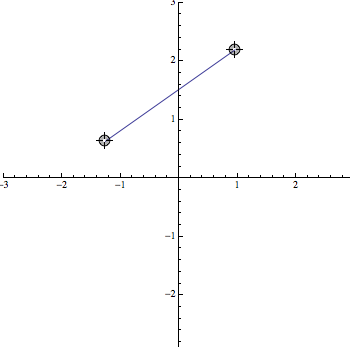 Not the answer you're looking for? Browse other questions tagged parametric-functions piecewise or ask your own question.

0
Confusing "Part::pspec" and "Part::partw" following call to ParametricPlot3D
2
Extract function from a parametric interpolating function
6
ParametricPlot3D for only part of a sphere
3
Convert a closed curve in an image to a parametric equation
1
ParametricPlot3D coloring based on whether function located inside/outside of another parametric function
1
How can I limit the plot of $f(x,y)=\rm{cons}t$ to the contour that passes through an specific point?
3
Plotting eigenvalue function along a path with correct coloring
1
Plotting iterates of a piecewise defined map