Where can I find a dark stylesheet for mathematica?

The default white is very tiring for the eye after some hours.

I created own dark theme for Mathematica. It looks like 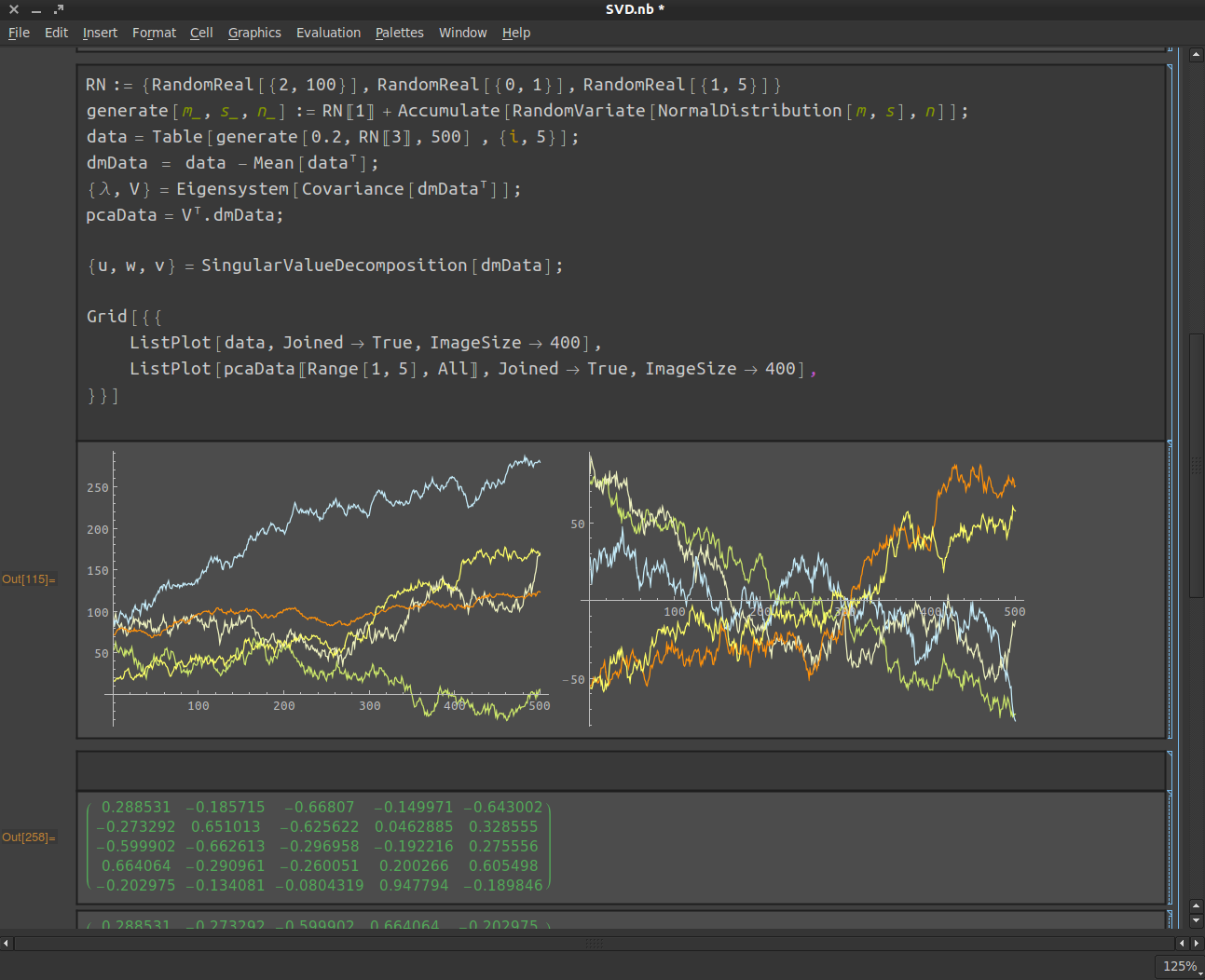 All stylesheets needed for that you can found here [repo]=https://github.com/dmarienko/Matlab/tree/master/.Mathematica You need to copy .nb files from repo [repo]/SystemFiles/FrontEnd/StyleSheets/ to your local Mathematica StyleSheets folder. After that you can choose stylesheet named as Dimad.nb (You also may set it as default stylesheet). Also there is Plot's functions color palette for dark theme in [repo]/Kernel/init.m. You need to add it's content to your local .Mathematica/Kernel/init.m file. Hope it helps.

PS: All was done for Mathematica 9.0, I didn't test it for other versions.

PPS: It uses Ubuntu Mono as default font. It can be obtained here http://font.ubuntu.com/

The quickest thing might be to modify the default stylesheet and save it as a new one. You can find a good description of how to do that on David Park's Mathematica page http://home.comcast.net/~djmpark/Mathematica.html.

I also created my own Mathematica stylesheet (github.com/MJSteil/Mathematica-DarkTheme) which includes a dark themed Screen Environment. 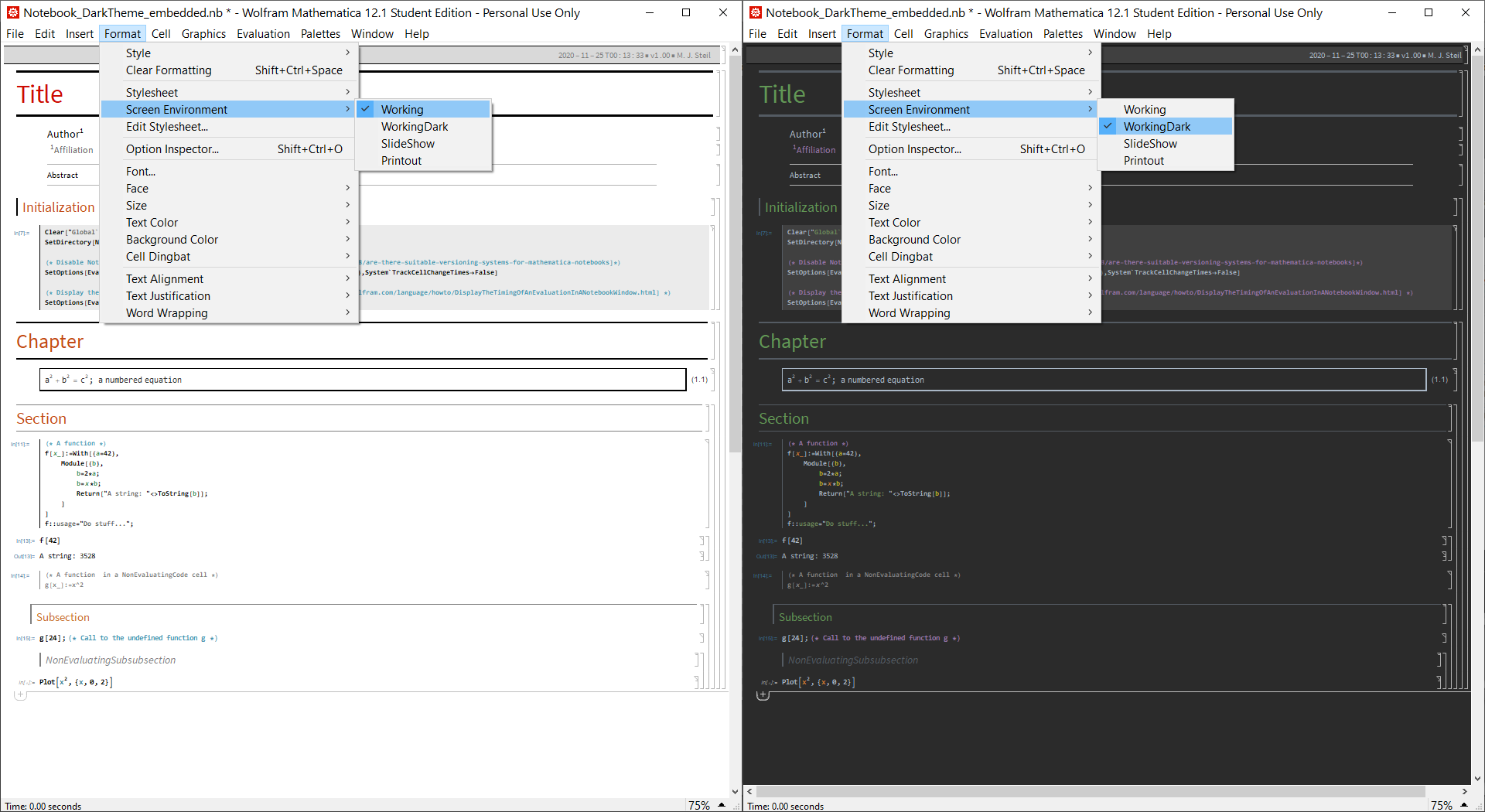 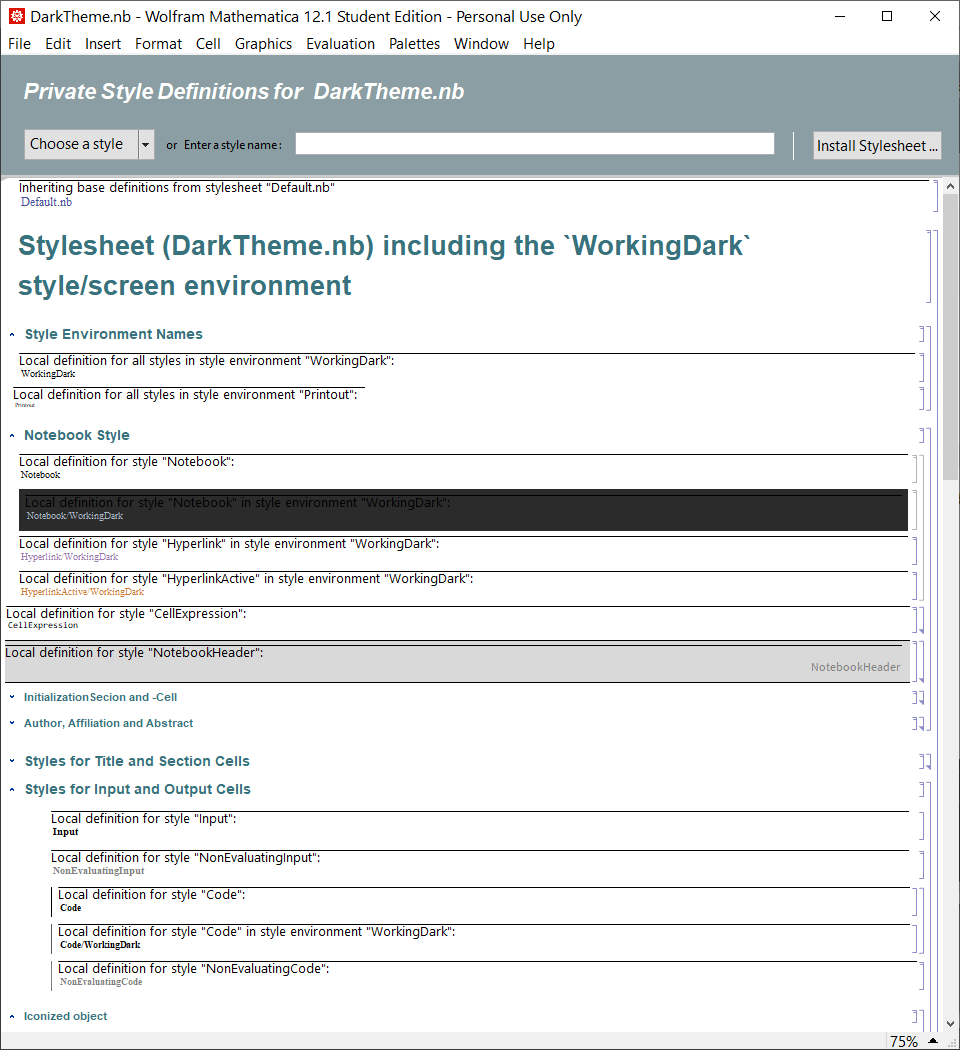 While I occasionally like working with a dark theme, for output and presentation a light themed notebook often feels/looks better in my opinion. Switching between Screen Environments using the front end/menu (Format->Screen Environment->...) or e.g. SetOptions[EvaluationNotebook[],ScreenStyleEnvironment->"..."] is in my opinion much more convenient than changing the actual stylesheet of the notebook (which might delete/overwrite custom/private style definitions).

The colors of my dark theme are loosely based on the Dracula theme in JetBrains CLion and I used strategies and adapted style definitions from various sources/dark themes to piece together my stylesheet. The stylesheet is not perfect and some modifications in the notebooks and or the stylesheet itself (for e.g. plotting) might be advisable/necessary to use the dark theme as a default. I mainly use it for coding.

Apart from the definitions related the dark working environment WorkingDark my stylesheet includes modifications of the Printing environment and some modified and special cells. The most notable changes here are that I use Code cells which per redefined default are not Initialization Cells for most of my input in the notebooks since I like to manually indent my code (I am unhappy with the default code indentation of Mathematica). Further more I have defined NonEvaluating versions for most cells (e.g. Section, Input, Code and more) which I use extensively in my notebooks to temporarily or in some cases permanently exclude code and entire sections of code from evaluation. Those NonEvaluating cells have a distinct (gray) formatting and are implemented by setting PrivateCellOptions->{"CellGroupBaseStyle"->{Evaluatable -> False}} or Evaluatable->False in their styles.

Further -- non-stylesheet -- modification one could consider when using dark themed notebooks (of any kind) is to use a custom MiscExpressions.tr file in $UserBaseDirectory\SystemFiles\FrontEnd\TextResources which uses a custom CellInsertionPointBitmap.png for the "CellInsertionMenu" since the default graphics of Mathematica includes a gradient which makes the icon almost invisible on a dark background. Another possible and potentially useful modification/addition to the front end related to the NonEvaluating cells is the addition of

to a user-version of KeyEventTranslations.tr under $UserBaseDirectory\SystemFiles\FrontEnd\TextResources\Windows (or corresponding folders for other operating systems) which switches the cell style of a selected cell between the plain and NonEvaluating version of the cell when pressing Controll+Keypad1. This does not work as expected/intended when selecting cells of multiple/different styles but works very well for cells with the same style/type.

Disclaimer: Modification of system files like MiscExpressions.tr and KeyEventTranslations.tr are "likely prohibited by the EULA" [see e.g. the discussion in https://mathematica.stackexchange.com/a/15408/] and I therefore do neither recommend nor provide such modified files. I am only pointing out the theoretical technical possibility of such modifications. This disclaimer does not concern the use of user defined stylesheets.

1
How can i change IDE color theme of Mathematica Wolfram?
1
Ergonomic night time reading settings
58
Can the banner in the Home Edition be removed?
22
Live code templates
14
High Contrast Syntax-Highlighting
3
Invert Colors Stylesheet White on Black
10
The dark side of Mathematica
4
Change default color when printing a string using Print[]
5
What is the black-background Mathematica code editor in the movie Arrival?