I want to combine two ListLogPlot plots. For example 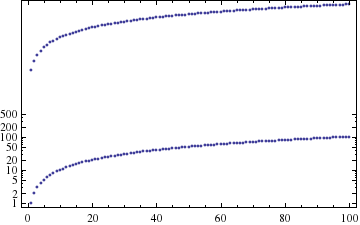 By using the ticks of p2, I got 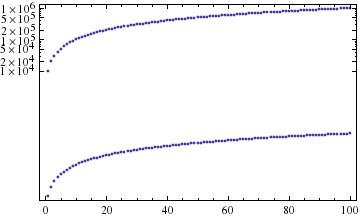 Both of the results have ticks which only cover a part of the figure. 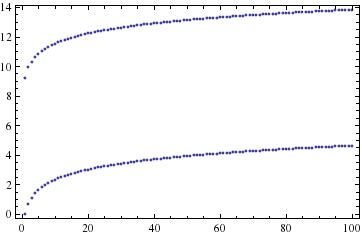 I actually got a wrong result with completely wrong ticks.

So would there be a way to let Show combine the plots and redraw the ticks automatically? Thanks!

However, it doesn't solve my problem because the two plots here have different scales which are non-overlapping. Thus the problem is not solved simply by ordering the plots or choosing which ticks to use.

(2) I could instead do ListLogPlot[{Range@100, 10^4*Range@100}]. However, actually each plot command in my realistic case is complicated enough thus it would be easier and more modular for me to draw them separately and combine them afterwards.

I really don't understand why Show behaves this way with LogPlots. Anyway a way out is to manually extract the the ticks from the plots:

and although this is probably easy to break (I don't know how to write a pattern that tells it that a is a sequence of logplots for instance) it should work. 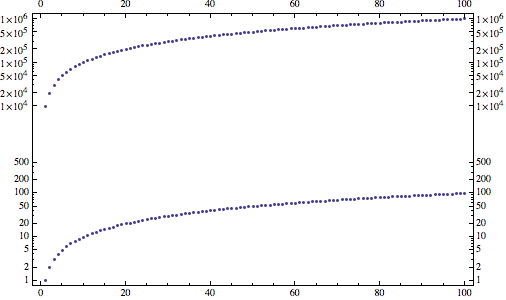 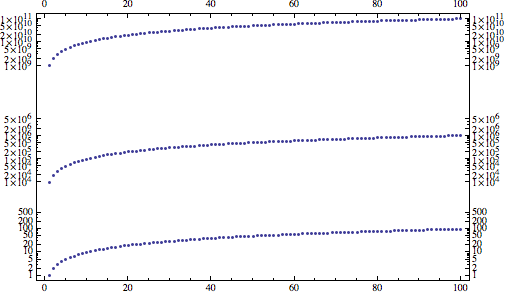 the obvious problem being that it doesn't fill the intermediate ticks between the plots. So better than nothing but not quite as Show is expected to work.

0
How to specify DataRange in a ListPlot with an imported set of data
5
ArrayPlot and non-integer PlotRange
2
Removing the white space around plots when using customized FrameTicks
4
DateListPlot in webMathematica doesn't show FrameTicks properly
1
combining two plots with different scales
3
How can I put common frame ticks on the leftmost of a row of graphics?
0
Is it possible to change the tick labels using string text by CustomTicks package?
5
Two functions in one plot with different y-axis scales?
0
Scientific notations with negative powers for plotting