Plotting a section of an hemisphere

I'm writing a little package in Mathematica for geology where a particular stone may be approximated as an hemisphere. Anyway this is a rough estimation because a real hemisphere has its height as loong as its radius. Instead, a reservoir stone (for an hydrocarbon) has often a form of a section of an hemisphere, its height is lower than the radius. For example, I can have an hemisphere with radius long 5 km and height of only 3 km and I can plot it like that:

and I get the following graphic: 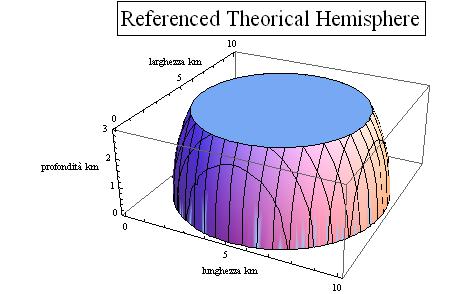 you'll agree with me that is a section of ah hemisphere without the top part, won't you?

Sometimes it may happen that the height is << radius. In my case, my geology student worked on a stone with radius of 5km and an height of only 0.2 km. If I try to plot this as I've done before, I get a very awful graphic, here:

So, I'd just like to know if there is a way to plot a more precise graphic, without all that irregular part at the base of the hemisphere.

but I really don't understand why for low values of the height the base of the hemisphere is so jagged!

How can I plot that? Thank you

I now have a better understanding of what you are looking for.

To get plot centered at the origin defined in terms of the radius and height, then you can use SphericalPlot3D as Kuba suggested. It would go like this. 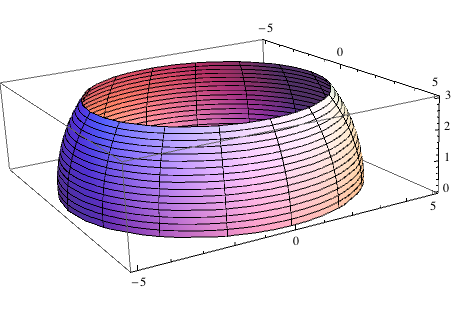 Note the use of a parameter to scale z-axis. It is set to h/(2 r) in the above plot. This gives true proportions.

In the extreme of r = 5 and h = .2, zScale will need to be adjusted to give a reasonable looking plot, which is going to look very much like a cylinder. 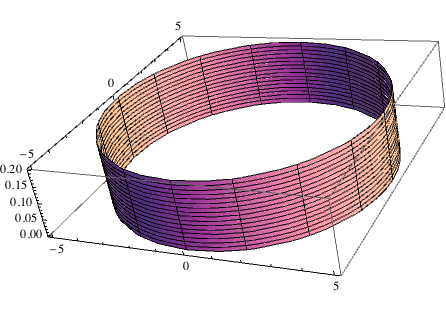 The ragged edges were caused by the fact that the parametrization of the surface in terms of height over the equatorial plane is singular at the equator, as you can also see in the increased distance between mesh lines on the plotted surface. So the main part of the solution is to choose a better parametrization, and the most common one is of course some variation of spherical coordinates.

Here is a completely different approach which also uses an angle to parametrize the surface, but should yield a more reusable and render-friendly object that can be displayed in Graphics3D.

It uses the fact that Tube can be provided not just with a list of points on which it is centered, but also accepts a second argument that contains a list of diameters. I use this to draw the shell. Tube is therefore a quick and simple way to define rotationally symmetric shapes without using one of the Plot3D family commands. 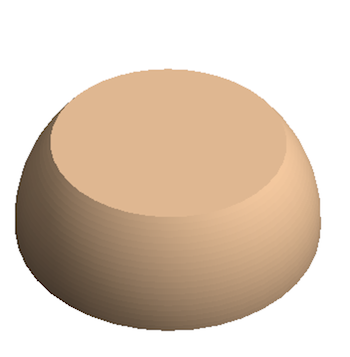 The function pebble has only one required argument: the height from the equator, assumed to be between 0 and 1. So it's basically the aspect ratio, and in the second plot I show how to adjust the overall size using Scale in Graphics3D. The second optional argument to pebble is the resolution with which the surface is drawn, given in terms of the number of latitude divisions.

27
Plotting piecewise function with distinct colors in each section
11
How can I scale a plot in vector graphic or PDF form?
1
Contour plotting temperature data on a hemisphere or circle
2
Folia of Descartes section plots
1
Plotting a Poincaré section
1
Plotting Cross section in a phase diagram
1
Cross-Section from ParametricPlot3D