The behavior indeed changed but now the documentation is clear about it.

This code is inconsistent with the description from Power Programming with Mathematica:

This behaviour has changed since that book was published. I am writing this additional answer to make it clear how Mathematica 9 searches contexts for symbols and that even the current version 9 documentation is incorrect in describing this.

Warning: the documentation contains an error in Mathematica versions older than 11.3.

The $ContextPath documentation states that

In fact $ContextPath is searched before $Context in the current version.

In old versions this was not the case, as the Wagner book describes. I don't know when the change happened.

The Contexts tutorial does correctly state the order of search in the current version:

Not an answer. Just screen shot. I booted up version 2.2 to verify the book result. And it does verify: 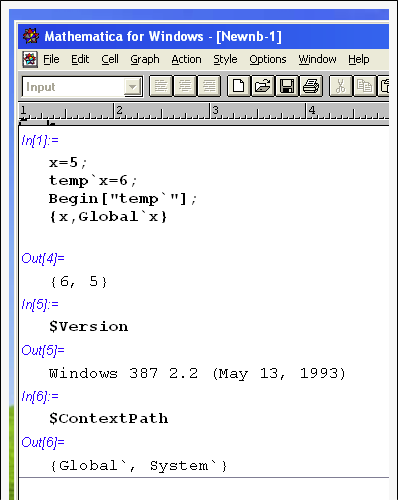 The same result we get with version 5.2: 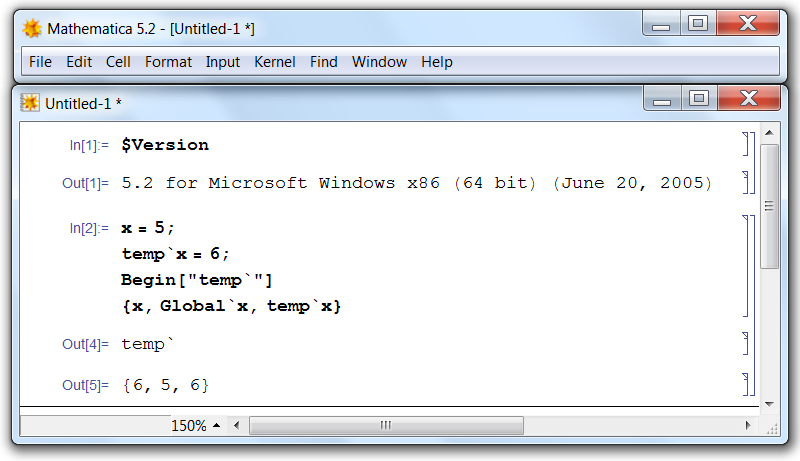 Something changed since the book was written (screenshot from version 9 follows):

It appears since version 3 shadowed variables are given priority, as demonstrated below. In the temp` context x is taken as temp`x unless Global`x exists.

This is because of $ContextPath. If the symbol outside the Begin/End is created in a context that is listed in $ContextPath, Mathematica will recognize it as belonging to that context even when called from a different context (even if Begin/End is put in a package file and called via Get):

Now if I remove "WebServices`" from $ContextPath:

Now what has changed in related code in successive versions, I have no idea.

It seems that when the book appeared, the behaviour of how a symbol is resolved was different. We have two important things:

Now there seems to be confusion how a symbol is found. The documentation to $ContextPath reads

This suggests that it is first checked whether a symbol is in the current $Context and after that all entries in $ContextPath are checked.

This is how it seemed to work when the book was written and it is completely understandable that you are confused why it behaves differently. In this tutorial it is written the other way around

Therefore, let me explain your code as I understand what happens.

You create two symbols in different contexts, the first one in Global` and the last one in temp` . As I understand it, the x in the last line is the global x because the context Global` is in $ContextPath rather than because your current $Context is Global`

With the Begin you set $Context to temp` , but that doesn't matter, because when you refer to x, it is found first in the Global` context which is an element of your $ContextPath. The rest should be clear, because when you specify the context of a symbol explicitly, there is no room for guessing.

Finally, please note that you can refer to the symbol x in the current context (meaning in $Context) by using `x and therefore

I haven't seen that almost the same question was already asked and has an answer which goes along what I wrote. Another important aspect was mentioned there that I haven't said: $Context controls where a new symbol is created (if there couldn't be found an existing one). Please read the following:

(this is wiki answer, as just noticed it is duplicate, but will keep it here for easy reference)

The result is different from Version 2.2 and version 10.1, this is just to show the difference. Something changed between 1993 and today: 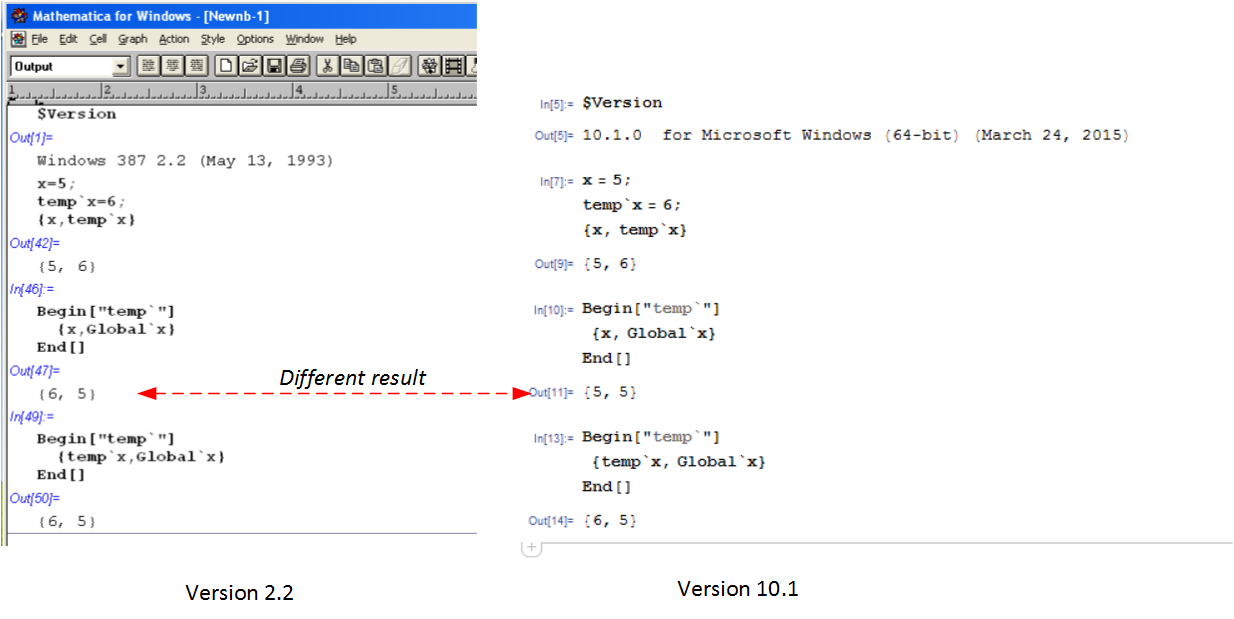 I think the following also fits the present discussion.

The last line generates the message

...::shdw: Symbol x appears in multiple contexts {temp`,Global`}; definitions in context temp` may shadow or be shadowed by other definitions. >>

...::shdw: Symbol x appears in multiple contexts {Global`,temp`}; definitions in context Global` may shadow or be shadowed by other definitions. >>

It looks like even the developer of this particular message was unsure about what exactly happens here ("may shadow or be shadowed").

The following would more correct in the first case:

...::shdw: Symbol x appears in multiple contexts {temp`,Global`} on the context path. Definitions in the first context, temp`, will shadow any other definitions. >>

The message should be the same in the second case, the order of the contexts should be exactly as they are in Append[$ContextPath, $Context].

Why is this message more correct?

A symbol x can be defined in multiple contexts that are not on the context path just fine, the following generates no error message:

By the way: You get no error message if you later do AppendTo[$ContextPath, "foo`"], even though the shadowing 'ambiguity' problem now exists.

The "::shdw" message should really be saying that within the set of contexts Append[$ContextPath, $Context] ("the context path") there exist two or more symbols with SymbolName x.

The original message is not clear about which definition will be given precedence, although the system knows this unambiguously: When an unqualified symbol x appears, it will be searched in Append[$ContextPath, $Context] in-order (it will be created in $Context if it cannot be found).

BeginPackage prepends the mentioned context to the context path, such that its definitions will take precedence.

Not the answer you're looking for? Browse other questions tagged bugs packages documentation contexts compatibility or ask your own question.

7
Basic misunderstanding of Begin
10
The introduction for Context in Wagner's book is out of date?
4
Is the package documentation buggy?
4
Variable not assigned to correct Context
3
Problem with contexts
0
Is it possible to create complicated packages from modules which work fine by copy paste? -- A counterexample
0
Why the package (.wl) and .nb behaves completely different
0
Using Begin to return to a previously defined context
164
Are you interested in purchasing David Wagner's "Power programming with Mathematica"?
30
What to be aware when using new-style package?
See more linked questions