After the August 2010 discovery that the diameter of the Rubik graph is 20, I wanted to make a way to visualize Rubik's graph. Since there are about $4.3 \times 10^{19}$ vertices in this graph, it is not feasible to store the whole thing. However, it is a Cayley graph of a group with 6 generators, it is 6-regular, and given any vertex $v$ in the graph, it's neighborhood $N(v)$ can be generated.

Using Roman Maeder's Wolfram Demonstrations Project as a basis, I tried to make a way to visualize this graph, one neighborhood at a time.

Starting with the GraphicsComplex solved, and the operation twist, which is simple enough to operate: 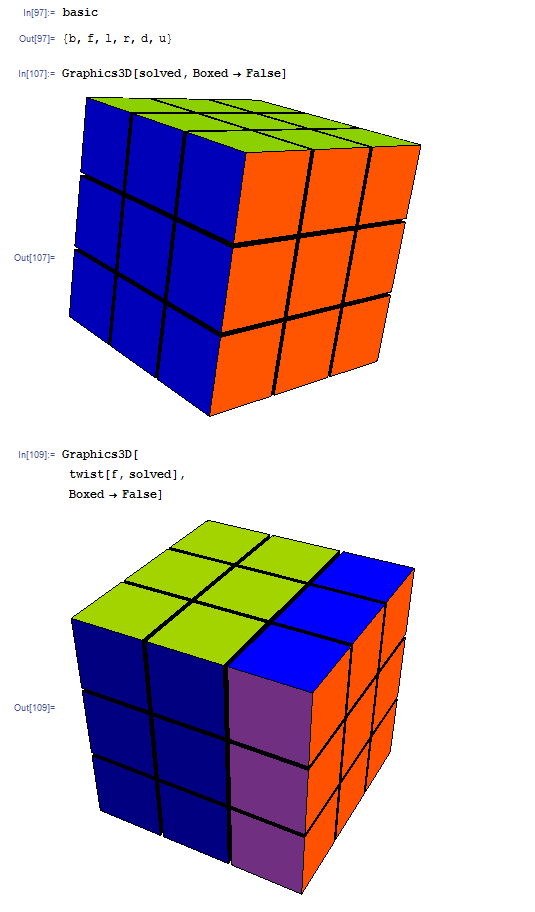 I want to construct a graph that displays the neighborhood, namely, those configurations of the Rubik's cube that can be reached by a R,L,F,B,U or D operation. The edge corresponding to the operation above should look like this:

The 3D part would be nice, but it's not necessary. How would I go about doing this?

I am not sure this is what you need. Please see if it helps. The little cubes are clickable, but not rotatable. We could put nicely formatted edge labels as well, but I didn't want to do that now as it would slow it down even more. 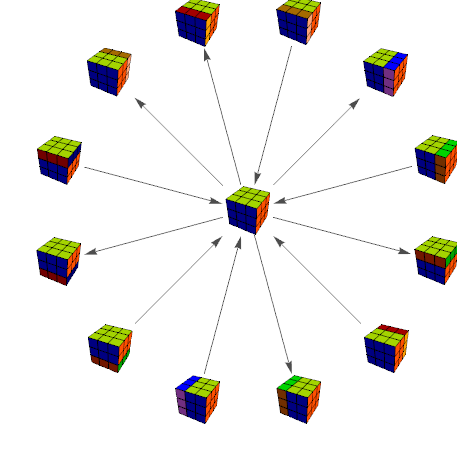 For others than the OP reading this:

You need to download the source of the demonstration, copy everything from the Initialization :> ( ... ) section of the Manipulate, and evaluate it. The code is very well written and very easy to work with.

Not the answer you're looking for? Browse other questions tagged graphics graphs-and-networks group-theory or ask your own question.

11
VertexSize doesn't scale with Graph layout?
10
Dynamic Graph visualization
2
Finding optimal inclusion cutoff to define subgraph of a "large" weighted graph
3
Diameter / Height of directed graph
0
I want to visualize this 3D like DensityPlot3D (About Diffraction of light)
1
traverse and animate a causal graph
0
Adding an inset box on a graph