I am trying to generate random samples of points in the unit square in such a way that points inside a given circle are twice as likely to be selected as points outside of that circle.

I tried to approach the problem by creating a 2D distribution. To do that I need to transform the function

into a probability distribution for both x and y between 0 and 1. Then I would use the PDF to generate points and eventually plot them. My main struggle comes from turning the If function into a two-variable PDF.

functions probability-or-statistics
Share
Improve this question
edited May 24 '19 at 5:23 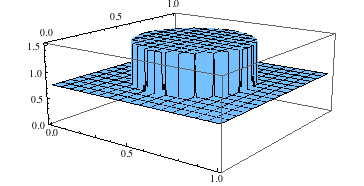 Alright, what you want can be stated in a simpler way : random sample of points on the unit square with double probability in the circle. No need for pdf's. Just generate random points on the square. If a point lies in the circle, add it. If not, toss a coin, add the point only if you get Head. Here is a way to do that.

(a variant of rejection sampling. If you are very unlucky it will take a very long time -- in practice no need to worry).

Now look at it: 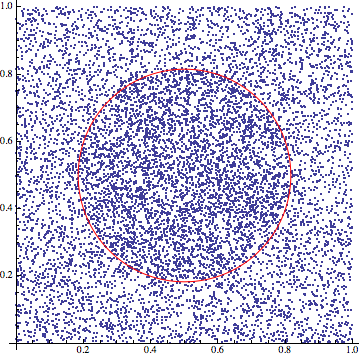 I'm arriving a bit late to the party, but I have an alternative approach that could be of interest to some readers.

All of the other solutions proposed (as of this writing) use variations on the acceptance/rejection technique of sampling. This works well enough for your specific problem, where the difference in the intensity of the process between the areas inside/outside the circle is comparatively small. However, as others have already pointed out, efficiency can become a problem in the limit of large differences between the "background" and the "features" in your problem -- you could have to generate a large number of "rejects" for each "good" sample.

However, if we think of your problem as an example of a (nonhomogeneous) Poisson spatial point process, we can use the additivity property of the Poisson distribution to assemble a sample from your complicated intensity function by combining realizations of simpler, easier to generate, point processes on the square and the circle in isolation, with little or no "wasted" computational effort.

Before we start, let's build a couple of helper routines to generate single, uniformly distributed, points on general rectangles and circles:

To this end, let us decompose the intensity function into the sum of a function $\lambda_{S}(x,y)=\lambda_{0}$ defined on the entire square and a function $$\lambda_{C}(x,y)=\begin{cases}\lambda_{1}-\lambda_{0} & (x,y) \in C \\ 0 & \text{otherwise}\end{cases}.$$ Therefore, if we want a total of $N$ points in our realization, we should draw a random integer distributed as $$N_{S} \sim \mathrm{Binomial}\left(N,\frac{10}{10+\pi(\lambda_{1}/\lambda_{0} -1)}\right),$$ for the number of points to draw from the uniform distribution over the entire square, and then augment that with $N-N_{s}$ points from the uniform distribution over the circle. Note that the probability only depends on the ratio of the intensities between the "background" and the "feature", and not their absolute magnitudes. (A consequence of conditioning on a particular number of points in the pattern.)

So what to use for the ratio? Here things get a little fuzzy, as it is not entirely clear what you mean by points are "twice as likely" to be drawn from the circle as from the rest of the area. @A.G. and @Rojo have interpreted this to be a direct statement on the ratio of the intensities of the point process within these two areas, i.e., $\lambda_{1}/\lambda_{0} = 2$. On the other hand, @ubpdqn has interpreted this as meaning that 2/3 of the points fall within the circle, and your later post seems to favour this interpretation. These are not equivalent statements, as in the latter case, the binomial probability becomes $10/(30-3\pi)$.

So, let's code up both options (in the same function, no less):

Let's take a look at the difference on realizations consisting of 1000 points generated using each method: 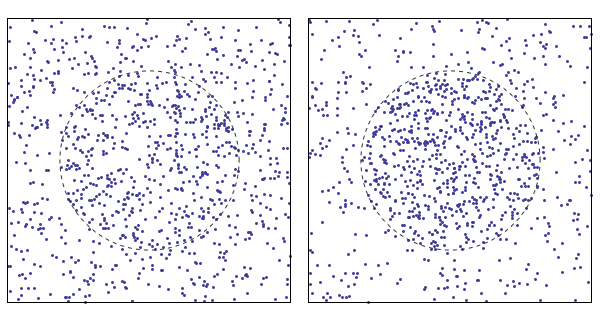 The "twice the rate" interpretation is on the left, while the "two thirds of the points fall in the circle" interpretation is on the right. There is a fairly substantial difference between the two; in particular, the edge between the two regions is much harder to discern on the left than on the right. (Grey dashed circle added to help in identification.)

I apologize for the length; hopefully those brave souls who read the whole post found it useful and/or learned something along the way. And now ... off to bed.

@Rojo has provided the backbone for this answer (and I have voted 1+ for his answer). I post this as my interpretation of the question is the generating a plot of a square region (0,1)x (0,1) in which there is sampling from a mixed distribution such that being within a given circle was twice as likely as not within this region. The annular region of the randomBoth leads to overinclusion of points inside the circle. This can be tested by making an emprical distribution of the sample and testing the probability.

Modifying the code of @rojo for what I interpret as the request: 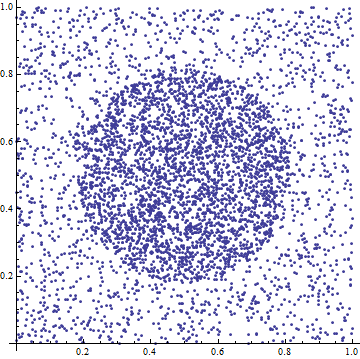 Using the sample as the basis for an empirical distribution:

I note that if the aim was to do probability calculations you could generate a mixed probability distribution as follows. It is, however, cumbersome. 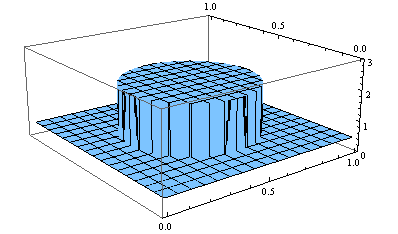 The CDF is a little more problematic but NProbability is useful: 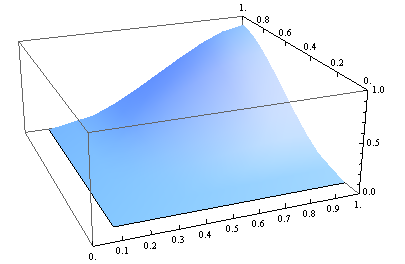 Unfortunately, you cannot sample (RandomVariate) for the mixture distribution but you can use NProbability for questions, e.g.

Again, I have voted for @Rojo but posted this as my interpretation of the desired outcome modifying (for reasons expressed above). 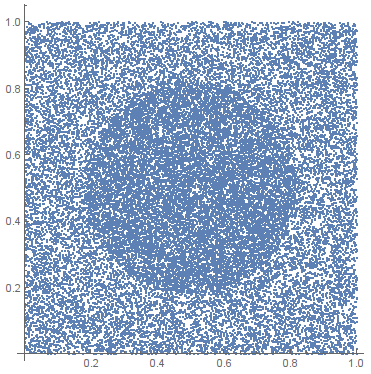 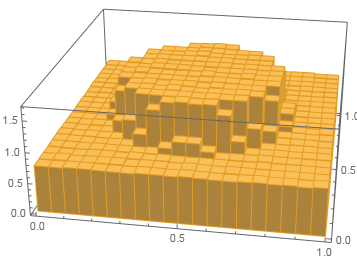 Besides the above algorithm you can use the Matropolis algorithm. It is a very general algorithm and it cat take any probability density functions. See here for details and the definition of Metropolis 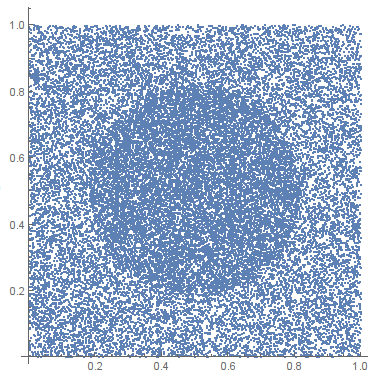 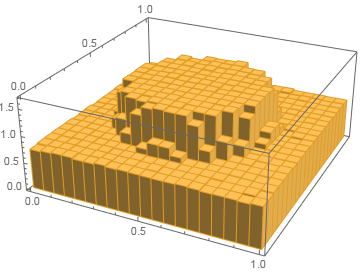 There is only one limitation: pdf should be Listable.

Then, the region we want to construct is:

For the OP example, then, we have:

Let's check that the total volume is 1:

and that the volume of the Cylinder portion is 2/3:

Now, we use RandomPoint to sample from the region, and keep only the first 2 coordinates: 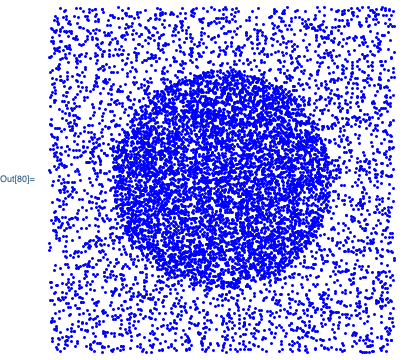 Not the answer you're looking for? Browse other questions tagged functions probability-or-statistics or ask your own question.