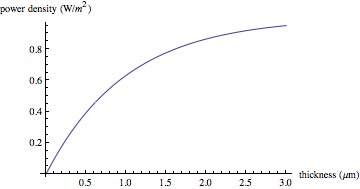 Let us hold the typographical quality of the labels to the standard set by LaTeX. There are four distracting quirks:

Am I entering the labels in the wrong form? How can they be fixed?

To fix the superscript placement and the italic m, you can use the options ScriptBaselineShifts and SingleLetterItalics in Style. For example

There are some other options in Style that might help. For example if you want a smaller font for the superscript, you can use the option ScriptSizeMultipliers.

Mathematica is not a typesetting engine. If you want proper typography, you should use something that is good at it. Of course, you can wrestle with Mathematica with boxes and stuff to hack it for some cases, but you'll soon find that it breaks the minute you change something or try something more complicated. Jens' and Heike's answers show you how to approach the problem in Mathematica. However, if the end goal is to use it in a $\LaTeX$ document, I would highly recommend using EPS figures and psfrags (in latex) to typeset the labels the way you'd like.

Here's an example for your case:

which produces the following output: 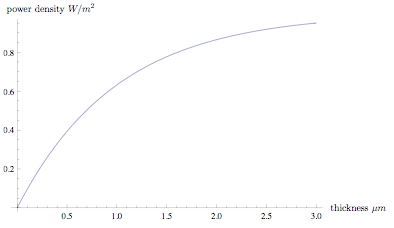 For the µ you'd need an upright Greek font which I don't think Mathematica has (the comments point out that there's \[Micro] which looks a little better but isn't upright). For the other label, you can get slightly better typesetting by doing it the way I suggest in this answer.

So you'd simply take your plot as given in the question, highlight the part of the label that says (W/m^2), and then choose the menu item Cell > Convert to > TraditionalForm (or the keyboard shortcut).

This is what you get: 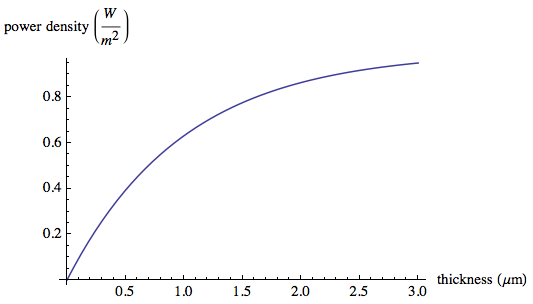 Finally, we don't like the italics added automatically. But this is now easy to fix by highlighting each unwanted italic and pressing cmd-i: 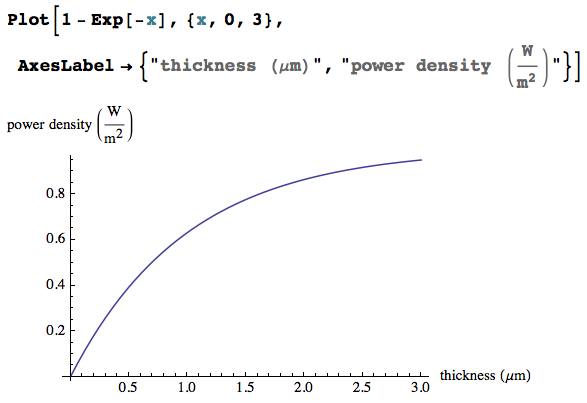 Of course, if you don't want a stacked fraction in the vertical label, you can always go into that invisible box, right to the end, and start deleting backward until only the W is left in that TraditionalForm. Then re-type the fraction the way you like.

As you see with the italics, this way of entering typeset equations still leaves something to be desired. Another point that you may want to correct is the size of the superscript. To so that, add the following to your Plot command:

This will allow the superscript to be made a little smaller. Alternatively, you can highlight whatever character you don't like and press cmd-- to reduce its size interactively. Likewise, you can move the superscript up or down, see the documentation for AdjustmentBox.

So below is the plot with all the formatting done as described above (superscript baseline adjusted two steps down with arrow keys ctrl-$\downarrow$). I also added a variable $I$ that still gets typeset italicized as it should be. It's also inside the TraditionalForm box. 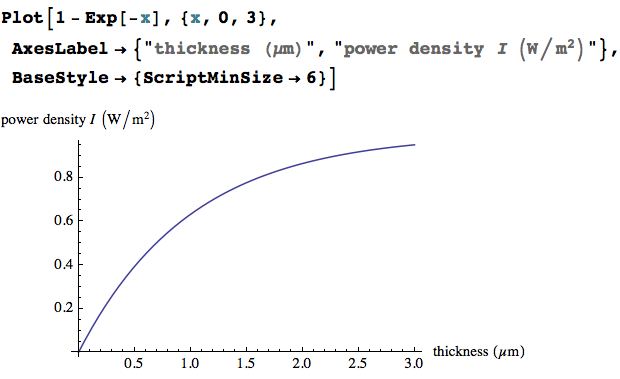 I've included the input in the screen shot to show one important point: the typeset output was achieved while still maintaining a similarly readable typeset input, instead of having lots of styling command obscure the labels in the source code (all the typesetting happened interactively in the TaditionalForm box during input).

One may say that this interactive way of typesetting is not very "programming-like" (I don't write explicit source code on input). If you want to get a record of what you actually tweaked in those invisible boxes, you can always find that out by copying the whole input line (Plot[...] in its entirety) into a new cell and preceding it by InputForm@Hold@. Then you'll see the input in all its ugliness inside a Hold statement. Or highlight the input cell and use the menu Cell > Convert to > InputForm.

Accidentally coming across this post, so here I just want to add some supplements about the slanted $\mu$.

There is indeed no Mathematica fonts containing upright $\mu$, but the system does offer method for invoking external fonts. For example using a Windows built-in font Symbol:

I've been struggling with this too. I ended up doing like what rm -rf suggested, but with a slightly different approach. I'm on a Mac.

If the export format is just 'PDF vector format', Greek symbols can disappear when imported to Mathematica.

The disadvantages of this method are that

I find them acceptable though, considering that

Combining what Heike and Silvia have suggested gives: 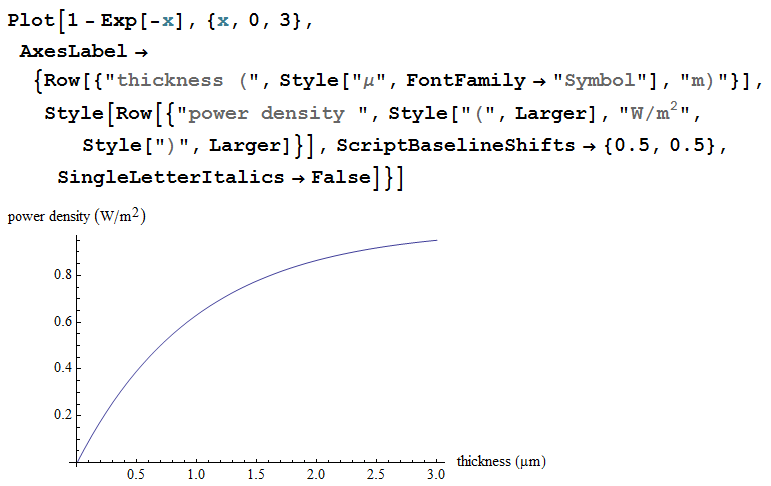 1
Parentheses in axis labels
15
How can I turn off SingleLetterItalics in PlotLabel, etc, when the Options Inspector won't do it?
12
Using a function name instead of its definition in AxesLabel
8
Line Breaks in AxesLabel or PlotLabel?
4
Horrific Looking Contour Integral in Mathematica Plot:
4
Way to input caligraphic letter as a axis label in Mathematica plot
1
write fractions onto image
0
How do I control italicization of text in axes and frame labels?