Assigning an equation as a variable

I am compiling a calculator where many slider parameters are used to define a value, where the defined value may then be reused to define another value. I am unable able to, or at least been unsuccessful in assigning these values as variables.

I want my coding to be able to refer to a variable (where the variable is an equation) in the sense, however the equation is defined by slider parameters and doesn't initially contain values.

An easier way to express this would be and how I would like it to display is like this:

I am unable to find a way where this is achieved, the calculator hosts several instances like this however some require the value from another equation without a parameter set from a slider. Some equations are reused multiple times, due to the equations being used there are inconsistencies with formulation until some sliders have changed their values.

I have a working example with complete code if required to see the depth of the formulation, however none of the equations require more than a three-step formulation. 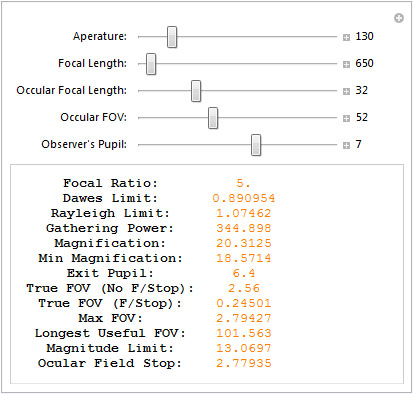 I reworked the layout to a Grid, I will have to adjust the decimals still. There are no more compiling errors, however the instance I want to adjust is being able to refer to a variable say with the Exit Pupil rather than reusing the Mag formula, there are many instances where I have reused the same formulas multiple times, if I can set some of the equations to a variable it will significantly reduce the size and unnecessary complexities. Is there a way I can do this?

I suppose what you ask about recalculating can be done with With or other `scoping construct. 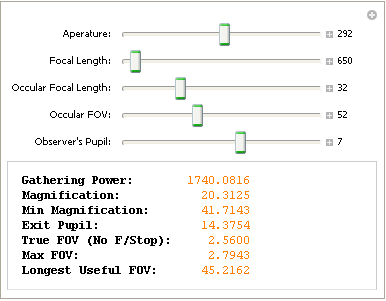 May be I am missing something but Manipulate is designed to automatically re-evaluate when one variable in its expression changes.

3
Converting from TableForm to Grid