In MATLAB there is a nice implementation of the so called AMD (approximate minimum degree permutation) algorithm named amd (see Online MATLAB Documentation). There is an alternative algorithm called COLAMD (see Online MATLAB Documentation). This algorithm is especially interesting when one wants to model large resistor networks e.g. calculate path resistances or reduce a network of resistors (for the theory see, e.g., Efficient Methods for Large Resistor Networks). There the AMD step is a preconditioning step for a large matrix before a Cholesky decomposition (available in Mathematica through CholeskyDecomposition) is done.

The original fortran coded algorithms can be found on the webpage from the autors.

Is anybody aware of an implementation of the AMD or the COLAMD algorithm in Mathematica?

While the MinCut (and also the MinimumBandwidth command in the GraphUtilities package) may be useful in many situations, this is a very general problem and might also benefit from more general solutions. For example, a while ago I had some data about the relationship between 120 items in the form of a distance matrix, basically a measurement of the distance between each object. With the data labelled arbitrarily, the matrix looks like this: 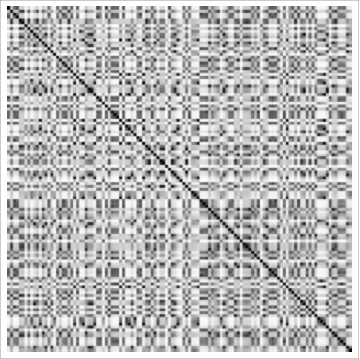 Black means zero distance (which you see along the diagonal because each item is zero distance from itself) while white represents the maximum possible distance between the items. Obviously, the matrix is completely scrambled. Laboriously using prior knowledge of the relationships between the various items, we were able to manually reorder the distance matrix into the form 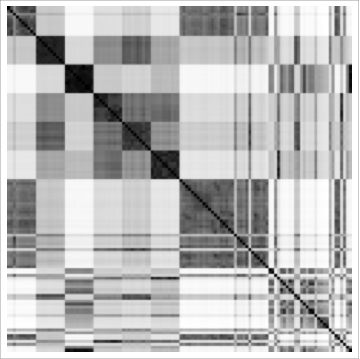 which nicely shows the clustering along the diagonal. Though we were quite happy with this, it nagged at me: shouldn't there be some way to automatically reorder the data and hence rearrange the matrix? I tried two commands from Matlab (symamd -- a variant of amd, and symrcm which implements the minimum bandwidth algorithm of Cuthill-McKee). I tried both MinCut and MinimumBandwidth ordering in the graph utilities in Mathematica. None came close to what we could do manually -- that is -- the reordered matrices, while more organized than the first matrix above, were still quite random looking.

At this point, someone suggested that what we really needed was a clustering algorithm because what we were trying for was to cluster the elements into small groups. Accordingly, I tried 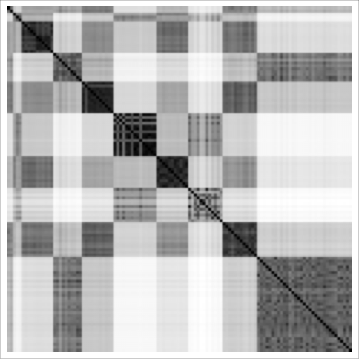 where scrambled is the unsorted (original) distance matrix. This was by far the best automated results we were able to obtain. The beauty of it is that by changing the DistanceFunction and the number of requested clusters, we could get many different plausible clusterings.

There is an alternative solution to implement AMD into Mathematica, by using the MinCut function from the GraphUtilities Package. This function is not just working on Graphs but is also usable for Matrices.

The algorithm is reordering the Matrix into blocks and effectively reducing the off diagonal elements. It can be involved rather easily. If one starts with a matrix G to be preconditioned the following commands are involved.

Here Length[G]/2 block diagonals are defined resulting in an almost diagonalized matrix. This matrix is much better suited for CholeskyDecomposition.

one gets the order index array for the preconditioned matrix through

Not the answer you're looking for? Browse other questions tagged matrix linear-algebra sparse-arrays modeling matlab or ask your own question.

13
What is the fastest way to find an integer-valued row echelon form for a matrix with integer entries?
28
Mathematica Implementations of the Random Forest algorithm
3
How to rewrite this function to be faster: Find sub-matrixes of boolean board which imply a given boolean pattern
2
What would be the Mathematica equivalent of sparse in MATLAB?
4
Building Projection Operators Onto Subspaces
0
Approximate results
13
Solving “Resistance between two nodes on a grid” problem in Mathematica