How to evaluate the $0/0$ type limit in Mathematica?

When I use Limit to evaluate the limit

(α and k are assumed to be real)

However, I believe the correct answer is

So, when should I trust the answer of Limit?

The answer is "ambiguous" because you have two parameters, $\alpha$ and $k$, and in this case the limit depends on the value of $\alpha$. What you can try is the following:

What I did is to remove all powers of $\alpha$ from under the square roots, so that the $k\to 0$ limit makes them look like $\sqrt{k+\alpha}\to \sqrt{\alpha}$ which manifestly cancels with the already present $\sqrt{\alpha}$ terms. At the end, I replace $\alpha$ by $\alpha^4$ to return to the original definition.

What follows below are the steps that led me to finally settle on the above approach. The upshot is that we have to avoid handing Mathematica expressions such as $\sqrt{\alpha^4}-\alpha^2 = 0$ because it doesn't simplify them at an early enough stage in the evaluation, even when the domain is real.

The behavior can be illustrated with a contour plot of f[k, α] around {0,0}: 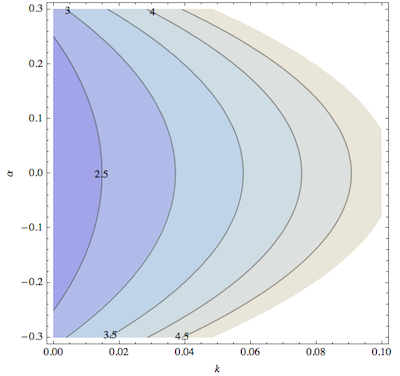 In the plane of $k, \alpha$, Mathematica acts as if it preferred to choose the "easiest" approach to the $k=0$ axis by taking $\alpha = 0$ in the first case. But what it should have done is to return the more general result, or a ConditionalExpression (not necessary in this particular case because the general result goes smoothly to 2 for $\alpha\to0$).

The first result is a bug, I would say: Since $\alpha$ is a constant while the limit is taken, setting it to zero when it's allowed to be any real number is just too restrictive. This preliminary conclusion that it's a bug is strengthened below where I try to understand why it may be happening, and whether the function f[k, α] can be made to look less pathological before doing the limit.

From the comments in the other answers, it is clear that Mathematica doesn't use the assumption of real variables at a sufficiently early stage in the calculation. You can even see that without taking any limit:

The reason for this result is that it can't see the simplification $\sqrt{\alpha^4}-\alpha^2 = 0$ which is always true for real $\alpha$. It knows this fact, but isn't using it. To check this, we can do

If this guess about the bug is right, then it's basically a problem of the order of two non-commuting limits. In addition to doing $k\to0$, the assumption of real $\alpha$ amounts to taking the limit $\Im(\alpha)\to 0$ (zero imaginary part). If you do the latter limit last, it gives $2$, but we are interested in the opposite order of limits.

To avoid this problem, one can eliminate the variable $k$ in terms of a new variable that gets rid of the square root:

First transform to variables $x=\sqrt{k}$ and $y=\alpha^2$ to end up with at most squares:

This is the correct limit if we reinstate $y=\alpha^2$. Note that I didn't have to use Limit at all because the function is well-behaved in this simplified form.

The answer does in fact seem to be 2. This can be seen by expanding over the $k + 2$ term in the numerator

A cursory inspection reveals that the first term must go to zero as $k \to 0$ like the third term did. This is in contrast to what you get, though, when you break the original fraction into separate terms:

The difficulty in interpretation here lies with $\sqrt{\alpha^4}$. If you specify that α ∈ Reals,

you get what you found

The problem here is the assumption as it implies that the positive root is taken, and hence jumps to the other branch. My initial analysis, however, does not make any assumptions about which branch is used by not expanding the square root.

Never trust anything or anyone with limits, indeed. Let's look at some plots for a variety of values of $\alpha$: 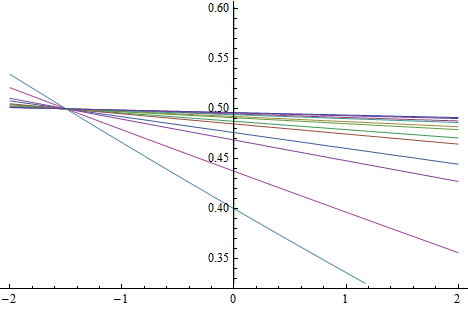 Applying L'Hospital's rule we get:

Indeed, calculating the limit for various of $\alpha$ and comparing it to the above result we get: 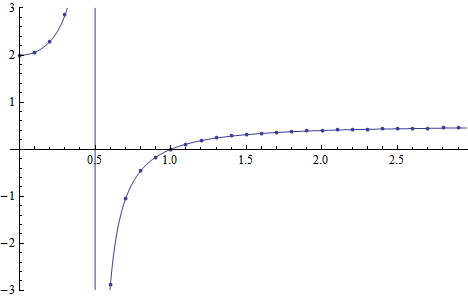 With assumptions about $a$:

Not the answer you're looking for? Browse other questions tagged calculus-and-analysis evaluation or ask your own question.

2
Integrating a product of two Meijer $G$ functions
4
Why won't Limit evaluate, and what can be done about it
9
Limit problem no longer works in Mathematica 11.1.0
2
Weird result in complex limit
4
Limit if the limit is a function
4
Is this second solution to this ODE correct?
0
Mathematica returns incorrect evaluation of integral