I need to use If but with only one option that is if "a" then do "b", else do nothing. So I wrote If[a,b] but the problem is that if it is not a it returns Null in my output. How to avoid this?

Here is the specific example I was working on.

I am looking for the number of comparisons performed by the quick sort algorithm. Here is the code from Rosetta code with my additions

It depends what you consider nothing, but you could try something like this

returns 3. Wrapping an argument of a function in Unevaluated is effectively the same as temporarily setting the attribute Hold for that argument meaning that the argument isn't evaluated until after it's inserted in the definition of that function.

If does not have the attribute SequenceHold; use the "vanishing function" ##&[] instead of Sequence[]:

See this and this for other uses, and SlotSequence if you are confused by ##.

To further explain the method above, Sequence is flattened when it appears as an argument (level one) in an expression with a head that does not have either the SequenceHold or HoldAllComplete attributes.

For our purpose in If one can use any expression which:

All of these heads meet this requirement:

Note that Sequence[2, 3] is flattened while all others remain. An application of List will invoke additional evaluation:

One sees that Unevaluated[6, 7] remains, which is an important distinction, but this is acknowledged behavior* for inert functions like List and it will evaluate in other applications:

Note: You may notice red highlighting in the Front End in the expression Unevaluated[6, 7]; the multi-argument (and null-argument) form of Unevaluated is not documented but it is used internally by Mathematica. You can adjust the highlighting to match by setting:

Version 10.2 introduces the function Nothing which is applicable to a subset of this problem. Specifically Nothing vanishes only if the surrounding head is List or if it is a non-delayed Value within an Association. Therefore one can write:

However it will remain in the output of:

Oleksandr expressed concern about the performance of ## &[]:

I am not extremely keen on ##&[]. It is concise (and I think clear enough after one understands it), but Function invocation is not the fastest operation in Mathematica. In most cases (except where the subtle differences actually matter), I would prefer Unevaluated@Sequence[] for explicitness and avoiding an unnecessary function call. Simon Woods's suggestion of Unevaluated[] could be the best compromise.

Here is a benchmark in 10.0.2 comparing the various methods. 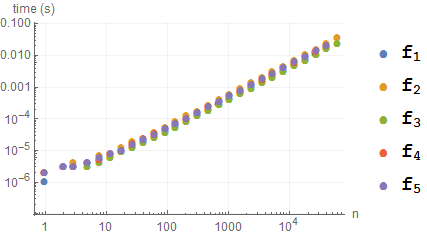 In this log-log scale the methods are so close that it is hard to distinguish them. Here is another presentation using the average of five runs:

At least on my system ## &[] appears to be slightly faster than Unevaluated[] contrary to Oleksandr's assertion. Both are a bit slower than Unevaluated @ Sequence[] because of an additional transformation step. (##&[] and Unevaluated[] both evaluate to Sequence[].) The assignment method (seq = Sequence[]) is the fastest. However this Function is extremely simple; in any nontrivial use the overhead of ## &[] is likely insignificant.

If the slight overhead or cryptic nature of ## &[] bothers you I propose using:

I note that all answers so far try to solve the problem of assigning a potential Null value by manipulating the return value. I feel it would be more appropriate to make the whole assignment conditional. Like this:

There's also a small bug in your program (count isn't initialized), and, of course, it doesn't sort at the moment. I assume that you aware of that and that the Return value is used for testing.

The code would then be:

I'm not sure about the j < pivot test in the second If. It depends on your intention with bb, but I guess the test should be j > pivot.

In Mathematica, “not returning anything” is not possible. An expression that does not return anything has a value of Null, even though you only actually see this Null in certain circumstances:

Null
is a symbol used to indicate the absence of an expression or a result. It is not displayed in ordinary output.

When Null appears as a complete output expression, no output is printed.

So, Null is always returned, but whether it's displayed depend on what you do with this returned value. For example:

The semantics for if is If[cond,t,f] if f (False) is not given Null is returned.

I am guessing that you need this in a pattern, then you can use Condition:

OK, here is a different version of quick sort (I found on my disk - I am not sure how the author is...)

If someone feels like adding the counter... my brain feels like gum this morning... please go ahead. The point in the above code is to not use the return value of If but to set it to a variable.

May not be efficient, but it works.

Wow, Looks like I'm more than a year late to this party, but I thought this would be nice to post. The Sequence @@ {} trick. Here it is using Mr. Wizard's example:

I am well aware that I am reviving an old question here, however I have been using Nothing as the third argument of my If functions and it has been doing a great job for me.

Not the answer you're looking for? Browse other questions tagged conditional faq return-value or ask your own question.

32
What are the cool kids talking about when they use ##&[]?
11
Why can't I use Sequence to perform a Select like task?
7
What is the correct way to conditionally add elements to lists?
4
Using If statements internal to Table
6
how to remove Null's from output?
5
Sequence evaluation in an If statement
3
If-statement does not evaluate if condition is true
2
Alternatives to Sequence[] as a nonexistent expression element
0
Eliminate some value from a matrix
564
Where can I find examples of good Mathematica programming practice?
See more linked questions

3
How to implement Condition programmatically?
4
Function returning Null along with other unexpected expressions
3
Is there a shorthand for Optional with Condition?
4
How to avoid applying Cross to a single argument?
0
How to check if every element of a list satisfies a condition inside an IF construct?
2
How to condition arguments of a pure function?