When using GraphPlot with an adjacency matrix, how can I make Mathematica draw exactly one self loop for any non-zero weight?

I have tried using the option MultiedgeStyle->None, but apparently Mathematica doesn't treat self loops in the same way it treats edges. For example, I find

while the same command, but with twice the weight on the self loop gives 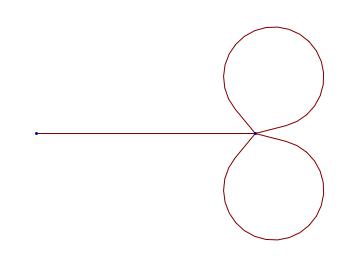 I would like the output from both commands to be the same. I know I could write a function to replace all non-zero values on the diagonal with 1, but I'd prefer not to for two reasons. One is that it seems as if this should be possible without resorting to that, and the other is that I'm actually using this inside another routine to draw graphs with edge weights displayed, to get output such as

A simple hack of a way to obtain the behaviour that you want is to negate the adjacency matrix. Now, don't ask me what that means or represents, but it works!

Modifying the example from the accepted answer in the question that CHM shared to include multiple self loops:

You can see that the second one displays the behaviour you want.

Not the answer you're looking for? Browse other questions tagged plotting graphs-and-networks or ask your own question.

12
Drawing Zonotopes from Adjacency Matrix
3
EdgeRenderingFunction question
2
Mathematica 8: EdgeList and CommunityStructureAssignment shadowing problem
13
Fast way to get edge-list of graph in terms of vertex indices (not vertex names)
2
How can one reflect the vertical axis and add a label for the vertical axis to reflect units when using DistributionChart?
3
Customising GraphPlot
3
How can I make a scatter plot from a matrix with many y-axis values for each x-axis value?